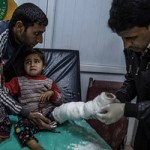 The Iraq War started 14 years ago this month, and it is showing no signs of letting up. Since Donald Trump took office, the U.S. military has expanded its aerial bombing campaign targeting areas held by the Islamic State. The Air Force Times is reporting U.S.-backed military aircraft have dropped over 2,000 bombs on Mosul so far this month.

Amnesty: Hundreds of Iraqi Civilians Killed in U.S. Airstrikes After Being Told Not to Flee Mosul
The Iraq War started 14 years ago this month, and it is showing no signs of letting up. Since Donald Trump took office, the U.S. military has expanded its aerial bombing campaign targeting areas held by the Islamic State. The Air Force Times is reporting U.S.-backed military aircraft have dropped over 2,000 bombs on the ISIS-held city of Mosul so far this month. According to Airwars, almost 1,500 civilians have reportedly been killed in U.S. airstrikes in Iraq and Syria this month alone. On March 17, a U.S. airstrike in Mosul reportedly killed up to 200 civilians. Meanwhile, Amnesty International is reporting that hundreds of Iraqi civilians have been killed by U.S.-led airstrikes inside their homes or in places where they sought refuge following Iraqi government advice not to leave during the offensive to recapture the city of Mosul.

Yemen: Trump Expands U.S. Military Role in Saudi War as Yemenis Brace for Famine
The U.S. is also rapidly expanding military operations in Yemen. The U.S. has reportedly launched more than 49 strikes across the country this month—according to The New York Times, that’s more strikes than the U.S. has ever carried out in a single year in Yemen. While the U.S. airstrikes have been targeting suspected al-Qaeda operations in Yemen, The Wall Street Journal is reporting the U.S. is now offering even more logistical and intelligence support for the Saudi-led war against Yemen’s Houthi rebels, who are accused of being linked to Iran. More than 10,000 people have been killed since the U.S.-backed, Saudi-led bombing campaign in Yemen began two years ago this month. Meanwhile, The New York Times is reporting today that the Trump administration has approved the resumption of sales of precision-guided munitions to Saudi Arabia. President Obama froze some of these weapons sales last year due to concern about civilian casualties in Saudi Arabia’s expanding war in Yemen.

U.N. Considers a Historic Ban on Nuclear Weapons, But U.S. Leads Boycott of the Talks
Some 120 countries gathered at the United Nations this week to draft a treaty to ban nuclear weapons. But the United States is leading a boycott of the talks. Meanwhile, more than 2,000 scientists signed an open letter endorsing the U.N. talks, and, on Tuesday, Pope Francis encouraged the United Nations to pursue the “total elimination” of nuclear weapons. Guest Zia Mian, physicist, nuclear expert and disarmament activist, is co-director of the Program on Science and Global Security at the Woodrow Wilson School of Public and International Affairs, Princeton University.