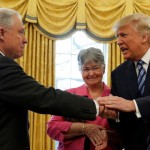 David Cay Johnston: As Jeff Sessions Scandal Brews, We Need a Public Probe of Trump’s Ties to Russia
The Trump administration is facing a new scandal as the Justice Department has acknowledged Attorney General Jeff Sessions met twice last year with Russia’s ambassador to the United States. This contradicts sworn testimony Sessions gave to Congress. During his confirmation hearing in January, then-Senator Sessions was asked by Minnesota Senator Al Franken whether he knew of contacts between Trump campaign officials and Russia’s government. Sessions replied, “I did not have communications with the Russians.” House Minority Leader Nancy Pelosi on Wednesday accused Sessions of “apparent perjury” and said in a statement, “Sessions is not fit to serve as the top law enforcement officer of our country and must resign.” Earlier today, House Majority Leader Kevin McCarthy and House Oversight and Government Reform Committee Chair Jason Chaffetz called on Sessions to recuse himself from a Justice Department probe into alleged ties between Trump campaign officials and Russia’s government.

Billionaire Wilbur Ross Confirmed Despite Questions over Ties to Russian Oligarchs Close to Putin
The New York Times reports that the Obama administration scrambled during its final days in office to preserve evidence of Russia’s collusion with the Trump campaign. Citing unnamed former officials, the Times says Obama’s aides left a “trail of evidence” across different government agencies to prevent the incoming Trump administration from covering up or destroying evidence. James Henry talks about his latest piece, “Wilbur Ross Comes to D.C. With an Unexamined History of Russian Connections.”

Asylum Seeker Battling Brain Tumor Removed from Texas Hospital in Handcuffs, Taken to Private Jail
As President Trump vows to deport “bad hombres,” we look at the shocking case of an asylum seeker from El Salvador who is being detained as she battles a brain tumor. Sara Beltran Hernandez was shackled at her hands and wrists, removed from the hospital and taken back to the Prairieland Detention Center near Dallas.

Note: Hours after this broadcast, Amnesty International announced Sara Beltran Hernandez will be released from detention today to be with her family and to seek treatment for a brain tumor.