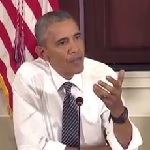 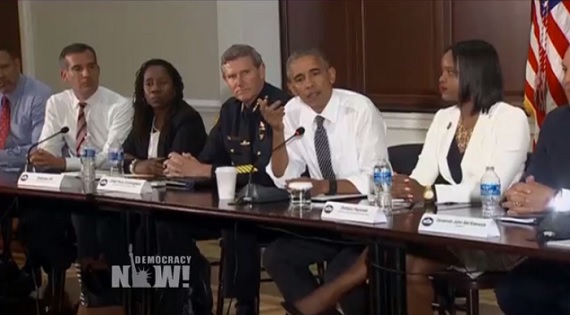 While the deaths of Alton Sterling and Philando Castile made national headlines, they were not isolated incidents. According to a count by The Guardian, at least 37 people have been killed by police in the United States so far this month. That’s more than the total number of people killed by police in Britain since the year 2000. Overall, police in the United States have killed a total of 585 people so far this year.

A Facebook Live video has gone viral of a black female police officer speaking out against police violence. “If you’re afraid to go and talk to an African-American female or a male, or a Mexican male or female, because they’re not white like you, take the uniform off!” said Nakia Jones of Warrensville Heights, Ohio. “You have no business being a police officer, because there’s many of us that will give our life for anybody, and we took this oath, and we meant it! If you are that officer that’s prejudiced, take the uniform off and put the KKK hoodie on, because I will not stand for that!”

Yesterday’s show exposed some of the troubling facts behind the shooting of Alton Sterling in Baton Rouge last week — in particular, how both men who video taped the incident were either harassed by the police, and in one case, placed in custody for 26 hours without charges being filed. Make no mistake: our streets are patrolled by a domestic army that has the power to kill people and then confiscate the evidence of what they have done.

Former police chief Norm Stamper said of Jones’ video: “White police officers, those who are so inclined to act on whatever prejudice they may have, need to listen to this woman. They need to hear every single word she said. She is expressing the rage of an entire people. She is expressing her truth about her fellow—her brothers and sisters in law enforcement. How dare they exhibit the kind of racism that suggests, among other things, their own internal prejudice and their own fear? If prejudice means anything, it means ignorance and fear. And if we don’t confront it forcefully, as she has done, I’m afraid we’re going to continue to have polite conversations that will get us nowhere.”

To those not familiar with Democracy Now!, this is the long-running show of Amy Goodman, broadcast by the Pacifica Radio Network, people I know and trust. Think of them as the news department of Planet Waves. Coverage of the political conventions this month will be expanded to two hours per day, as Democracy Now! will have crews at both the DNC and the RNC.

This service is sponsored by your subscriptions, memberships and reading purchases from Planet Waves.

2 thoughts on “Democracy Now! — Police Who Kill and Confiscate the Evidence”