In what Ed Snowden has called “the most important tech case in a decade,” the FBI is seeking a court order that could get them a back door into every portable device. 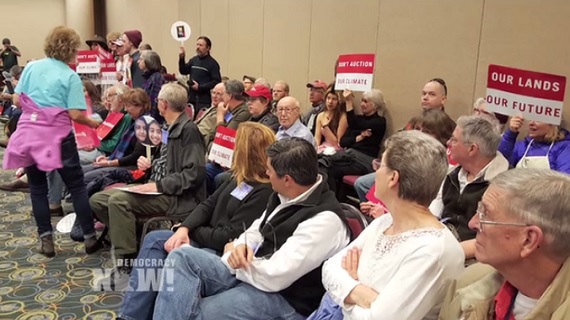 In what Ed Snowden has called “the most important tech case in a decade,” the FBI is seeking a court order to unlock the iPhone of San Bernardino shooting suspect Syed Rizwan Farook. Announcing his decision to fight the case in an open letter, Apple CEO Tim Cook accused the FBI of asking the corporation “to build a backdoor to the iPhone.” Amy Goodman interviewed Alex Abdo, staff attorney at the ACLU National Security Project.

Abdo also commented on a case the ACLU themselves are currently prosecuting. They seek release of the 1800 photos related to military torture still withheld by the Pentagon.

Additionally, today’s episode covers the purchase of over 1700 acres of land in Utah by author and Keep It In The Ground activist Terry Tempest Williams. The public land, containing oil and gas reserves, was being auctioned off to energy developers.

The South Dakota State Senate passed a bill Tuesday that prevents transgender students from using bathrooms in public schools corresponding to their gender identity. The bill requires that restrooms “shall be designated for and used only by students of the same biological sex.” It further defines “biological sex” as “the physical condition of being male or female as determined by a person’s chromosomes and identified at birth by a person’s anatomy.”