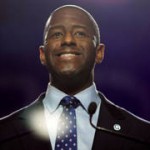 After progressive candidate Andrew Gillum pulled off a stunning upset in Florida’s Democratic primary for governor Tuesday, putting him on a path to become the state’s first African-American governor, he was attacked within hours by his Republican opponent.

From the Grassroots to the Ballot Box: How Gubernatorial Candidate Andrew Gillum Won In Florida
After progressive candidate Andrew Gillum pulled off a stunning upset in Florida’s Democratic primary for governor Tuesday, putting him on a path to become the state’s first African-American governor, he was attacked within hours by his Republican opponent—handpicked by Trump—who warned voters not to “monkey this up” by supporting Gillum. Even Fox said they they don’t condone his comments. Two activists who’ve worked with Gillum are Phillip Agnew with Dream Defenders in Florida and Charlene Carruthers, head of Black Youth Project 100 and author of the new book “Unapologetic: A Black, Queer, and Feminist Mandate for Radical Movements.”

“Mississippi Is Failing”: As Prisoner Deaths Reach 13 in August Alone, Advocates Demand Answers
Prisoners are dying at the highest rates the state of Mississippi has ever seen. Thirteen prisoners have died behind bars in the month of August alone. That’s compared to 47 prisoner deaths in Mississippi in the entire year of 2015. Prison officials insist the deaths are by natural causes. But advocates and family members are demanding answers for the shocking spike in prisoner deaths, including the killing of 24 year-old Nija Syvallus Bonhomme at the privately run Wilkinson County Correctional Center in southwestern Mississippi. Bonhomme died in his cell after what officials say was a fight with another prisoner. But his family says that the prison failed to protect him from violent conditions that led to his death, allowing him to return to his cell after a violent altercation with his cellmate. His sister told Democracy Now!, “They threw him back to the dogs.” Jody Owens is director and managing attorney of the Mississippi office of the Southern Poverty Law Center, part of a recent lawsuit against the Mississippi Department of Corrections alleging grave abuses of prisoner rights at a private prison.

Update on Prison Strike Demanding End of “Slave Labor”: After 10 Days, Protests Spread to 11 States
Prisoners across the country join work stoppages, hunger strikes and commissary boycotts in at least 11 states to protest prison conditions and demand the end of what they call “prison slavery.” Organizers report prisoners in South Carolina, Georgia, Florida and Indiana are demonstrating. Individuals in Texas, California and Ohio have gone on hunger strike, including some in solitary confinement. Meanwhile, at least six people have been hunger-striking inside the Northwest Detention Center in Tacoma, Washington, for more than a week. Amani Sawari is a prison strike organizer working on behalf of Jailhouse Lawyers Speak, a network of prisoners who are helping organize the nationwide strike.