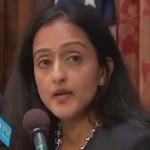 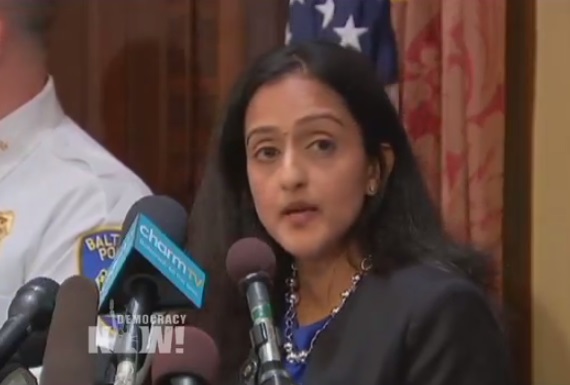 A Justice Department investigation has concluded Baltimore police have carried out a practice of racially discriminatory policing by systematically stopping, searching and arresting black residents at a disproportionate rate. “BPD engages in a pattern or practice of making unconstitutional stops, searches and arrests; using enforcement strategies that produce severe and unjustified disparities in the rates of stops searches and arrests of African-Americans; using excessive force and retaliating against people engaging in constitutionally protected expression,” said Deputy Assistant U.S. Attorney General Vanita Gupta. The 163-page report revealed “supervisors have issued explicitly discriminatory orders, such as directing a shift to arrest ‘all the black hoodies’ in a neighborhood.”

The damning report issued by the Justice Department this week about policing in Baltimore highlighted one African-American man in his fifties who was stopped more than 30 times by police. For more, Amy Goodman spoke with Maryland Congressmember Elijah Cummings and local activist Ralikh Hayes about their own experiences with police in Baltimore. Cummings says he has been stopped “many times”; Hayes says at least 20 times; meanwhile, reporter Baynard Woods, who is white, says he has never been stopped.

Further revelations about former Fox News chief Roger Ailes are surfacing, raising questions about how much the company was aware of his transgressions. Ailes has now been accused of sexual harassment by more than 20 women, including Fox News anchor Megyn Kelly and former anchor Gretchen Carlson. Earlier this week, another former Fox News host also accused Ailes of sexual harassment. Andrea Tantaros says she repeatedly reported Ailes’s harassment to senior Fox executives last year. She says she was demoted and then taken off air as a result.

Sarah Ellison, Vanity Fair contributing editor, joined the show. Her most recent piece is an exclusive headlined “Inside the Fox News Bunker.” It exposes the existence of explosive audiotapes recorded by multiple women in conversation with Ailes. Sarah Ellison is also the author of “War at The Wall Street Journal: Inside the Struggle to Control an American Business Empire.”

Before Roger Ailes headed Fox News, he was a top Republican operative. In 1988, he helped Vice President George Bush defeat Michael Dukakis in the presidential race. Managing Dukakis’s campaign was the feminist legal scholar Susan Estrich, who wrote groundbreaking works on sexual harassment and rape. To the surprise of some, she is now Ailes’s attorney, defending him in the sexual harassment lawsuit that led to his ouster from Fox News.