Toward the end of this edition is an interview with the former finance minister of Greece, who explains the 2008 financial crisis, the Greek debt crisis and how they are related. This is essential information if you’ve ever been curious about these things. 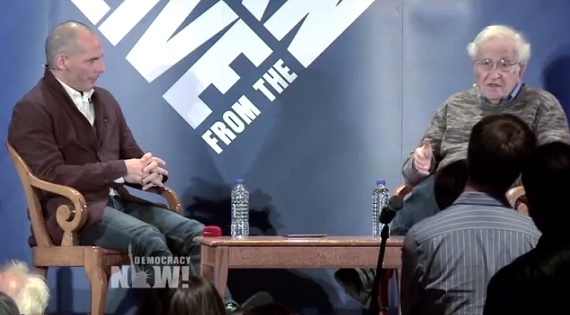 Yanis Varoufakis and Noam Chomsky at the Brooklyn Public Library.

During an event Tuesday at the Brooklyn Public Library, Noam Chomsky, the world-renowned political dissident, linguist, author and professor, was asked about Bernie Sanders’ run for the White House. “[H]e’s considered radical and extremist, which is a pretty interesting characterization, because he’s basically a mainstream New Deal Democrat,” Chomsky said. “His positions would not have surprised President Eisenhower, who said, in fact, that anyone who does not accept New Deal programs doesn’t belong in the American political system. That’s now considered very radical.”

As the White House backs calls for Greece to continue to implement widespread austerity measures, former Greek Finance Minister Yanis Varoufakis has published a new book, titled “And the Weak Suffer What They Must?” which examines the relationship between Greece’s situation and the 2008 financial crisis. He spoke to Amy Goodman and Nermeen Shaikh.

When we were elected in January of 2015, President Obama came out with a splendid statement. If I recall correctly, he said something along the lines that the principle of the greatest austerity for the most depressed of nations needs to be re-examined. He was opposing it. And now we have, yet again, this typical disconnect in the American administration. It’s quite astonishing and saddening. On the one hand, the president is making all the right noises, and on the other hand, his spokesman comes out and supports cruel, self-defeating, irrational, inefficient, mind-blowingly inane austerity.

On the motivations behind the IMF imposing austerity on Greece, Varoufakis adds: “The Greek people took on the largest loan in human history on behalf of German and French bankers.” He notes the conditions of the loan “guaranteed our national income would shrink by one-third. So it was impossible to repay that money.” On his resignation as finance minister, he states: “Let me put it this way. We were elected to say no to the creditors. No to what? Not to an agreement, to an honorable agreement, but no to the extending and pretending, to the continuation of the depression.”