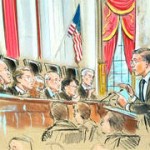 Supreme Court Appears Set to Uphold Trump’s Travel Ban Targeting Muslim Nations
The U.S. Supreme Court looks poised to uphold President Trump’s travel ban, which blocks most people from seven countries—including Iran, Libya, Somalia, Syria, and Yemen—from entering the United States. During oral arguments on Wednesday, Justice Anthony Kennedy, who is often seen as a swing vote, appeared to side with the conservative wing of the court. U.S. solicitor general Noel Francisco argued the travel restrictions were not a “so-called Muslim ban” and that the order fell within the president’s executive authority. Francisco made the claim even though Trump campaigned for president calling for a “total and complete shutdown of Muslims entering the United States.” Lower courts have repeatedly ruled against versions of Trump’s travel ban, saying they were unconstitutional and in violation of federal immigration law.

Travel Ban Blocks U.S. Citizen From Bringing Yemeni Daughter with Cerebral Palsy to U.S. for Care
During Wednesday’s oral arguments over President Trump’s travel ban at the Supreme Court, attorney Neal Katyal made reference to how the ban has blocked a U.S. citizen named Nageeb al-Omari. Al-Omari has been prevented from bringing his 10-year-old daughter to the United States to receive medical care for cerebral palsy. The family’s story was featured in a new Al Jazeera Fault Lines documentary, “Between War and the Ban: A Yemeni-American Story.”

Senior Democrat Caught on Tape Pressuring Progressive Congressional Candidate to Drop Out of Race
A new exposé by The Intercept confirms how powerful Democratic officials have worked to crush competitive progressive candidates in primaries around the country, choosing instead to back moderate, business-friendly candidates. This comes after President Obama used his farewell address to encourage Americans upset about the outcome of the 2016 election to take action by running for office themselves. Levi Tillemann is a Colorado man who heeded Obama’s call and found himself disappointed by the process, after he was repeatedly pressured by powerful Democrats not to run. In fact, he recorded a conversation in which he was directly told to drop out of the Democratic primary for Colorado’s sixth Congressional district by none other than the second-ranking House Democrat, Representative Steny Hoyer of Maryland. We go to Denver to speak with Levi Tillemann, a candidate in Colorado’s Democratic primary for the 6th Congressional District, which includes Denver. He is featured in the new exposé by Lee Fang, investigative journalist at The Intercept, “Secretly Taped Audio Reveals Democratic Official Pressuring Progressive to Bow Out of Election.”

After Fleeing Genocide, Over Half a Million Rohingya Refugees Now Face Monsoon Season in Bangladesh
Aid agencies are scrambling to relocate tens of thousands of Rohingya refugees from crowded camps in Bangladesh ahead of the monsoon season in June. Hundreds of thousands of registered Rohingya refugees now live in the Cox’s Bazar district in southeastern Bangladesh after fleeing a Burmese military campaign of rape, murder and arson that the U.N. has called a “textbook example of ethnic cleansing.” Now the United Nations High Commissioner for Refugees says at least 150,000 people are at “high risk from mudslides and floods” from the heavy rain in the next few months. Some could be moved to a recently formed island at the mouth of the Meghna River. This comes as more refugees are still crossing over from Burma.