A New York City police officer, Peter Liang, who killed an unarmed African-American man, will serve no time in jail. 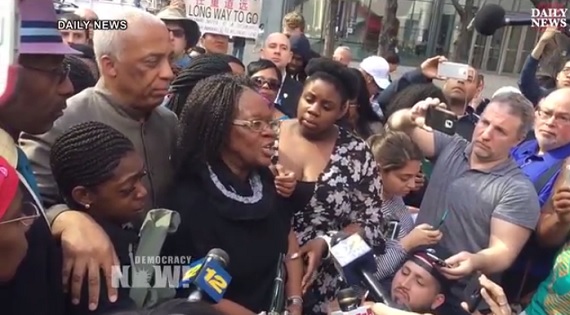 Hertencia Petersen, Akai Gurley’s aunt, speaking out after the verdict on his killing. Image: video still

A New York City police officer who killed an unarmed African-American man will serve no time in jail. Officer Peter Liang, who is Chinese-American, fatally shot Akai Gurley in the darkened stairwell of a Brooklyn housing project. In February, a jury convicted Liang of manslaughter and official misconduct, but the judge made the rare decision to reduce the verdict to criminally negligent homicide. The case has sparked a debate within the Asian-American community as some say Liang was scapegoated because of his race.

Also today, the first criminal charges have been filed in the ongoing Flint water contamination crisis that exposed nearly 100,000 residents to poisonous levels of lead. Two state employees have been charged with misleading the U.S. government about the problem. The charges come as Michigan’s Republican Governor Rick Snyder said he has not been questioned by prosecutors in connection with the crisis. Protesters have called for Governor Snyder to resign over his handling of the Flint water crisis.

Finally, President Obama’s fourth visit to Saudi Arabia for a meeting with leaders of the Gulf Cooperation Council comes as human rights organizations have been pressing Congress to block arms sales to the kingdom in the wake of Saudi-led coalition strikes in Yemen. The United Nations estimates more than 3,000 civilians have been killed since the Saudi bombing campaign began last March.