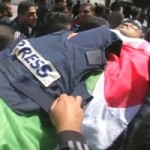 Palestinian protests against the Israeli occupation are continuing this week as Israel begins to mark the country’s 70th anniversary of its founding in 1948. According to the Palestinian Ministry of Health in Gaza, Israeli forces have killed 33 Palestinian protesters over the past three weeks.

Rashid Khalidi: The Israeli Security Establishment is Terrified of a Nonviolent Palestinian Movement
Palestinian protests against the Israeli occupation are continuing this week as Israel begins to mark the country’s 70th anniversary of its founding in 1948. According to the Palestinian Ministry of Health in Gaza, Israeli forces have killed 33 Palestinian protesters over the past three weeks since the “Great March of Return” protests began to commemorate the mass expulsion of Palestinians during Israel’s establishment. Palestinian authorities estimate nearly 4,300 Palestinians have been injured in the peaceful protests—many were shot with live ammunition or rubber-coated steel bullets. Gaza authorities have also accused Israel of deliberately targeting journalists and medics. Since the protests began, one journalist—Yaser Murtaja—was killed, and 66 journalists were injured. In addition, 44 medics have been wounded, and 19 ambulances were reportedly targeted. The protest marches are set to last to until May 15, recognized as the official Israeli Independence Day. Palestinians mark the date as Nakba Day, or “Day of the Catastrophe.”

Moazzam Begg on Syria: A No-Fly Zone Is Needed Around Idlib to Prevent “Unprecedented” Massacre
In Syria, international chemical weapons inspectors are still attempting to enter the town of Douma, where an alleged chemical gas attack killed dozens of people earlier this month. Inspectors with the Organization for the Prohibition of Chemical Weapons arrived in Damascus on Saturday but have been unable to reach Douma and have accused Syrian and Russian authorities of blocking access to the town. On Friday, the United States, France and Britain carried out airstrikes against two chemical weapons storage facilities and a research center in Syria. In response to the U.S.-led strikes, Russia announced it may supply Syria with a state-of-the-art air defense system—a move likely to anger the United States and Israel. Israel has carried out more than 150 bombing raids in Syria since 2011. Just last week Israel bombed an Iranian air-defense system at a Syrian base.

Rashid Khalidi: Ending the Proxy Wars in Syria is Key to De-escalating Deadly Conflict
Columbia professor Rashid Khalidi discusses how the war in Syria in has become a proxy war with a number of nations involved, including Russia, Iran, the United States, Israel, Turkey and the Gulf States.

Former Gitmo Prisoner Moazzam Begg Explains How Torture & U.S.-Run Prisons Helped Give Birth to ISIS
As President Trump continues to refuse to close the U.S. military prison at Guantanamo, a former prisoner at the camp, Moazzam Begg, discusses the issue. He was held in extrajudicial detention by the U.S. government from 2002 to 2005, first in Kandahar then at Bagram Air Base for approximately a year before being transferred to Guantánamo.

Stunning Investigation Confirms Black Mothers and Babies in the U.S. Are in a Life-or-Death Crisis
Tuesday marked the end of the inaugural Black Maternal Health Week, a campaign founded and led by the Black Mamas Matter Alliance. The effort was launched to build awareness and activism around the state of black maternal health in the U.S. The United States ranks 32 out of the 35 wealthiest nations in infant mortality. Black infants are now more than twice as likely to die as white infants, a disparity greater than existed in 1850, 15 years before slavery ended. Each year, an estimated 700 to 900 maternal deaths occur in the U.S., which is one of only 13 countries in the world where the rate of maternal mortality is worse than it was 25 years ago. And according to the Centers for Disease Control, black women are three to four times as likely to die from pregnancy-related causes as their white counterparts. These statistics were reported in a powerful new investigation in the New York Times Magazine, “Why America’s Black Mothers and Babies Are in a Life-or-Death Crisis.” Even more shocking is that, according to the report and contrary to widely accepted research, education and income offer little protection. The answer to the disparity in death rates has everything to do with the lived experience of being a black woman in America.