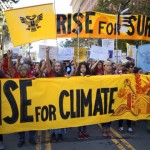 Hundreds of thousands of protesters in more than 90 countries joined a worldwide day of protest demanding urgent action to address climate change Saturday. In San Francisco, up to 30,000 people took part in the Rise for Climate, Jobs and Justice march.

Rise for Climate: Tens of Thousands March in San Francisco Calling for Fossil-Free World
Hundreds of thousands of protesters in more than 90 countries joined a worldwide day of protest demanding urgent action to address climate change Saturday. In San Francisco, up to 30,000 people took part in the Rise for Climate, Jobs and Justice march. It is believed to be the largest climate march ever on the West Coast. The protest came just days before the start of the Global Climate Action Summit being organized by California Governor Jerry Brown. Democracy Now! was in the streets of San Francisco for the march.

Ex-Senate Aide: Kavanaugh Should Be Impeached for Lying Under Oath About Stolen Democratic Memos
Supreme Court justice nominee Brett Kavanaugh is facing accusations of perjury following his confirmation hearing last week. Democratic Senator Patrick Leahy of Vermont has suggested Kavanaugh lied to the Senate Judiciary Committee during his 2004 and 2006 hearings to become a federal judge. During those hearings Kavanaugh denied seeing private Democratic files that detailed strategies for opposing Republican judicial nominees while he was associate counsel in the George W. Bush White House. Lisa Graves is the former top aide to Senator Patrick Leahy, whose new piece is headlined “I Wrote Some of the Stolen Memos That Brett Kavanaugh Lied to the Senate About.” Graves is the former chief counsel for nominations for the ranking member of the Senate Judiciary Committee and was deputy assistant attorney general in the Department of Justice. She is now co-director of Documented, which investigates corporate influence on democracy.