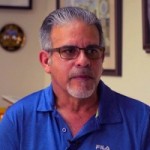 As Democracy Now! was in Puerto Rico, the island’s governor announced he was instructing the Puerto Rico Electric Power Authority, known as PREPA, to cancel its controversial $300 million contract with the tiny Montana-based company Whitefish Energy.

Head of Puerto Rico Electrical Workers’ Union Demands Corruption Probe of Whitefish Energy Contract
Democracy Now! has just returned from Puerto Rico. As an interview took place with Ángel Figueroa Jaramillo, head of the Puerto Rico electrical workers’ union, the island’s governor announced he was instructing the Puerto Rico Electric Power Authority, known as PREPA, to cancel its controversial $300 million contract with the tiny Montana-based company Whitefish Energy. The move came after enormous pressure and scrutiny of the contract to reconstruct Puerto Rico’s electrical power grid devastated by Hurricane Maria. Whitefish Energy is based in the tiny hometown of Interior Secretary Ryan Zinke. The head of the private equity company that backs Whitefish, Joe Colonnetta, was a Trump campaign donor. All of this comes as a leaked copy of the contract sparked even further outrage last week, when it revealed that the terms barred penalties for work delays and prohibited the project from being audited.

Trump Admin Continues Threats & Provocations Against North Korea, Laying Groundwork for Nuclear War
Tensions continue to mount between the United States and North Korea, after U.S. Defense Secretary James Mattis’s week-long visit to Asia and ahead of Trump’s 12-day visit later this week. Mattis emphasized a diplomatic resolution to the standoff between the two countries, but warned that the U.S. would not accept a nuclear North Korea. Congressional Democrats are pushing legislation that would prevent President Trump from launching a preemptive strike against North Korea.