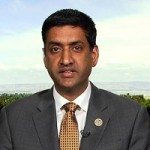 The U.S.-backed, Saudi-led war and naval blockade in Yemen has sparked a cholera epidemic: the largest and fastest-spreading outbreak of the disease in modern world history. There are expected to be a million cases of cholera in Yemen by the end of the year, including at least 600,000 children.

“Stop the Unconstitutional War in Yemen”: Rep. Ro Khanna on Growing Opposition to U.S.-Backed War
The U.S.-backed, Saudi-led war and naval blockade in Yemen has sparked a cholera epidemic that has become the largest and fastest-spreading outbreak of the disease in modern world history. There are expected to be a million cases of cholera in Yemen by the end of the year, with at least 600,000 children likely to be affected. The U.S. has been a major backer of the Saudi-led war. But in Washington, opposition to the U.S. support for the Saudi-led war is growing. Lawmakers recently introduced a constitutional resolution to withdraw all U.S. support for the war. In an op-ed for The New York Times, Congressmembers Ro Khanna, Walter Jones and Mark Pocan wrote that they introduced the resolution “in order to help put an end to the suffering of a country approaching ‘a famine of biblical proportions.’ … We believe that the American people, if presented with the facts of this conflict, will oppose the use of their tax dollars to bomb and starve civilians.”

CA Rep. Khanna: “We Can’t Control Environmental Catastrophes Caused by Extreme Climate Conditions”
In California, raging wildfires fueled by climate change have killed at least 40 people, destroyed thousands of homes and businesses and scorched more than 200,000 acres—roughly the size of New York City. The fires are now the deadliest in California since record keeping began. At least 100,000 people have been forced to evacuate, with about 75,000 people still displaced. Some residents had to flee for their lives, as drought conditions and powerful, erratic winds have contributed to the explosive spread of the fires. The fires have also contributed to a housing crisis, leaving thousands homeless in neighborhoods of California where rental prices were already sky-high before the blazes.

Scientist Daniel Swain on “Unprecedented Climate Conditions” Contributing to Deadly CA Wildfires
In California, at least 40 people have died, hundreds are missing, and thousands of homes have been destroyed by uncontrollable wildfires. More than 11,000 firefighters are battling the wildfires, with the support of hundreds of fire engines and dozens of helicopters and airplanes. Many of the firefighters are prisoners, who are working for as little as $1 a day. Among the victims of the wildfires were elderly residents of Sonoma County, where authorities say their bodies were so charred, the only way to identify some of them was by the serial numbers on artificial joints or other medical devices.

“Everything was on Fire”: CA Resident Describes Fleeing 30-Foot-High Flames Surrounding Her Ranch
In California, at least 100,000 people have been forced to evacuate, with about 75,000 people still displaced. Some residents had to flee for their lives, as drought conditions and powerful, erratic winds have contributed to the explosive spread of the fires. Among those who had to flee was Jan Hoyman, a pottery artist who narrowly escaped the fire in Mendocino County last week.

COINTELPRO 2? FBI Targets “Black Identity Extremists” Despite Surge in White Supremacist Violence
A leaked FBI counterterrorism memo claims that so-called black identity extremists pose a threat to law enforcement. That’s according to Foreign Policy magazine, which obtained the document written by the FBI’s Domestic Terrorism Analysis Unit. The memo was dated August 3, 2017—only days before the deadly white supremacist rally in Charlottesville, Virginia, where white supremacists, Ku Klux Klan members and neo-Nazis killed one anti-racist protester, Heather Heyer, and injured dozens more. But the report is not concerned with the violent threat of white supremacists. Instead, the memo reads: “The FBI assesses it is very likely Black Identity Extremist perceptions of police brutality against African Americans spurred an increase in premeditated, retaliatory lethal violence against law enforcement and will very likely serve as justification for such violence.” Civil liberties groups have slammed the FBI report, warning the “black identity extremists” designation threatens the rights of protesters with Black Lives Matter and other groups. Many have also compared the memo to the FBI’s covert COINTELPRO program of the 1950s, ’60s and ’70s, which targeted the civil rights movement.