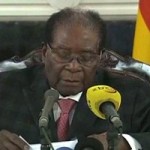 In Zimbabwe, longtime leader Robert Mugabe is refusing to resign as president amid a growing political crisis. Last week Mugabe was placed under house arrest after Zimbabwe’s military seized parliament, courts, government offices, and the main airport in the capital, Harare.

As Zimbabwe’s Mugabe Refuses to Resign, Advocates Say Coup “Is Not the Answer” for Meaningful Reform
In Zimbabwe, longtime leader Robert Mugabe is refusing to resign as president amid a growing political crisis. Last week Mugabe was placed under house arrest after Zimbabwe’s military seized parliament, courts, government offices, and the main airport in the capital, Harare. The apparent coup came a week after President Mugabe ousted his Vice President, Emmerson Mnangagwa, who’s since been named by the military as interim president. Members of Zimbabwe’s ruling party are preparing to meet to discuss Mugabe’s impeachment, after the deadline for him to resign came and went this morning. On Sunday, Mugabe gave a televised address acknowledging the country’s problems, but did not mention stepping down. Zimbabwe’s ruling party, ZANU-PF, has expelled Mugabe and First Lady Grace Mugabe from the party. Impeachment proceedings against Mugabe may now begin as soon as Tuesday. Glen Mpani is Mason fellow at the Kennedy School of Government at Harvard University. He is a democracy and governance practitioner who has worked for the last 15 years in Africa. His recent op-ed in the New York Times is titled, “For Zimbabwe, a Coup Isn’t the Answer.”

Trump Cited Pittsburgh in Pulling Out of Paris Deal—But Mayor Says City Will Implement Accord Anyway
At the U.N. climate talks in Bonn, Germany, officials representing nearly 200 nations ended an all-night round of negotiations early Saturday morning. The negotiations were aimed at hammering out the implementation of the 2015 Paris climate deal. This year was the first COP since President Trump vowed to pull the United States out of the landmark 2015 Paris Climate Deal, a process which takes four years. Despite Trump’s vows to withdraw from the deal, a number of progressive U.S. senators, governors and mayors staged an anti-Trump revolt last week in Bonn, proclaiming “We Are Still In.”

Virginia Governor Defies Trump on Paris Climate Deal, Pushes Investments in Solar & Wind
At the U.N. Climate Summit in Bonn, Germany, a number of U.S. senators, mayors and governors staged a defiant anti-Trump revolt. The lawmakers were part of a coalition of cities, universities, faith groups and companies who attended the U.N. climate summit to reject Trump’s vow to pull the U.S. out of the Paris deal and instead proclaim “We Are Still In.”