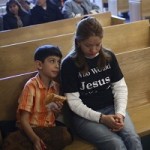 Advocate: DHS Proposal to Split Children from Parents at U.S. Border is “State-Sanctioned Violence”
The Department of Homeland Security is considering a proposal to radically shift how federal agents treat undocumented families—including asylum seekers—who attempt to enter the country. Reuters is reporting DHS is considering a proposal to separate mothers from their children if they are caught trying to cross the border together. Under the plan, mothers would be held in custody while children would initially be placed in the custody of the Department of Health and Human Services. Texas Democratic Congressman Henry Cuellar criticized the new proposal. He said, “Bottom line: separating mothers and children is wrong. That type of thing is where we depart from border security and get into violating human rights.”

Advocate: We Expect Trump’s New Muslim Travel Ban Will Be As Unlawful As First Executive Order
Trump is expected to issue a new executive order temporarily banning all refugees, as well as people from six majority Muslim countries, from entering the United States. The New York Times reports the new ban would apply to people from Syria, Sudan, Iran, Somalia, Libya and Yemen, but not people from Iraq. Iraqis were included in Trump’s first Muslim travel ban, which was blocked by the courts in February amid massive nationwide protests. Unlike the first ban, the new executive order is also not expected to apply to people from these countries with green cards or who already have a visa.

Meet Jocelyn Avelica, Whose Dad Was Detained by ICE While Driving his Daughter to School
On Tuesday morning, Romulo Avelica-Gonzalez and his wife were driving their 13-year-old daughter Fatima to her school in the northeast Los Angeles neighborhood of Highland Park just after dropping off their younger daughter. Then, two black, unmarked vehicles approached the family’s car. Fatima captured part of the arrest on her cellphone, in which she can be heard sobbing as ICE agents arrest and detain her father. He has lived in the United States for more than two decades and is the father of four. In a statement, ICE defended its actions, saying Avelica-Gonzalez had a DUI in 2009 and an outstanding order of removal from 2014.

Debate: Are Trump’s Ties to Russia a Dangerous Security Issue or Critics’ Fodder for New Red Scare?
The ongoing mystery of Russia’s role in the 2016 U.S. election took an unexpected turn early Saturday morning when President Trump took to Twitter, writing: “Terrible! Just found out that Obama had my ‘wires tapped’ in Trump Tower just before the victory. Nothing found. This is McCarthyism!” Trump offered no evidence, but within 24 hours he called on lawmakers to probe Obama’s actions. The New York Times is reporting F.B.I. director James B. Comey has asked the Justice Department to publicly reject Trump’s assertion that Obama ordered the tapping of Trump’s phones. The Times described Comey’s request as a “remarkable rebuke of a sitting president.”

3 thoughts on “Advocate: DHS Proposal to Split Children from Parents at U.S. Border is “State-Sanctioned Violence””