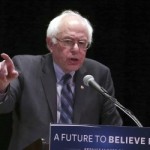 On Friday, House Republicans failed to muster enough support to pass the GOP healthcare plan, which some call Trumpcare. In response, Vermont Senator Bernie Sanders has announced he will soon introduce a bill to create a single-payer healthcare system, which is backed by several progressive groups.

After Republican Infighting Dooms GOP Healthcare Plan, Trump Vows to Let Obamacare “Explode”
Under President Obama, House Republicans voted more than 50 times to repeal or rewrite the Affordable Care Act. But on Friday, the House couldn’t muster the votes needed to pass its own healthcare law, which some call Trumpcare. Just minutes before the vote was scheduled, Trump pushed House Speaker Paul Ryan to pull the legislation. The bill was opposed by every Democrat, as well as many members of the ultraconservative House Freedom Caucus and some moderate Republicans.

More Than 1,000 Civilians Reportedly Killed by U.S.-Led Airstrikes as Trump Expands War on Terror
Details are emerging about U.S.-led coalition airstrikes that are believed to have killed over 200 people in a single day in Iraq. The U.S.-led coalition has admitted launching airstrikes on March 17 targeting a crowded neighborhood in Mosul. They are among the deadliest U.S. airstrikes in the region since the U.S. invasion of Iraq in 2003. According to some reports, one of these strikes destroyed houses where hundreds of people were taking refuge amid the city’s heavy fighting. Up to 80 civilians, including women and children, may have died in one house’s basement alone. This bombing is just one of an onslaught of U.S.-led coalition airstrikes in Iraq and Syria that has killed as many as 1,000 civilians in March alone, according to the journalistic project Airwars.

Bill McKibben: Trump May Have Approved Keystone XL, But People Will Stop This Pipeline Again
The Trump administration has approved a permit allowing TransCanada to build the Keystone XL pipeline, which would transport 830,000 barrels of crude every day from Alberta’s tar sands to refineries on the U.S. Gulf Coast for export. TransCanada’s Keystone XL pipeline would cross the Yellowstone River, as well as the Ogallala Aquifer, the largest freshwater aquifer in the United States. Trump’s approval of the Keystone XL pipeline is a reversal of the Obama administration’s decision to halt the project in late 2015 following massive, sustained resistance from Native Americans, farmers, ranchers and environmental groups.