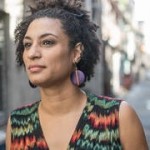 Former Brazilian President Lula: It’s Clear Marielle Franco’s Assassination Was Premeditated
Here’s a Democracy Now! exclusive interview with, Brazil’s former President Luiz Inácio Lula da Silva, who is now running for president again. The discussion begins with the assassination of 38-year-old Rio city councilmember and human rights activist Marielle Franco, who was killed last week. Franco, who was a black lesbian, was known for her fierce criticism of police killings in Brazil’s impoverished favela neighborhoods. Her death comes at a pivotal moment for Brazil and the future of democracy in South America’s largest country. Just last month, President Michel Temer ordered Brazil’s military to assume control of police duties in Rio. “The only thing that she did was to work against the assassination of black people in the peripheral areas in the defense of human rights,” says Lula da Silva.

Exclusive: Brazilian Presidential Candidate Lula on Facing Jail as He Runs for President Again
Former Brazilian President Luiz Inácio Lula da Silva, the highly popular former union leader, is running for president in this year’s election even as he is facing a possible prison term on what many believe to be trumped-up corruption charges tied to the sprawling probe known as “Operation Car Wash.” Lula was convicted of accepting a beachside apartment from an engineering firm vying for contracts at the state oil company Petrobras. But many of Lula’s supporters say the conviction was politically motivated. President Lula responds to the charges against him. “We’re awaiting for the accusers to show at least some piece of evidence that indicates that I committed any crime,” he notes.

Brazil’s Former President Lula on U.S. Intervention in Latin America & 15th Anniv. of Iraq Invasion
Former Brazilian President Luiz Inácio Lula da Silva co-founded Brazil’s Workers’ Party and served as president from 2003 to 2010. During that time, he helped lift tens of millions of Brazilians out of poverty. As he runs for president again, he discusses the 15th anniversary of the U.S. invasion of Iraq, and U.S. interference in Latin America.