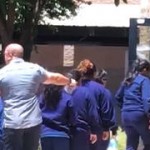 A federal judge will hold a hearing today on whether to delay Tuesday’s deadline that mandated the reunification of all children under the age of 5 whom the Trump administration separated from their parents at the border.

CIA-Linked Military Contractor Used Arizona “Black Site” to Secretly Jail Dozens of Migrant Children
A major U.S. military and CIA contractor has been detaining dozens of migrant children inside a vacant Phoenix office building with dark windows, no kitchen and only a few toilets, according to a new investigation by Reveal from the Center for Investigative Reporting. Reveal learned about what some are calling the “black site” for migrant children after one local resident filmed children in sweatsuits being led into the building. The building was leased in March by MVM, a defense contractor that Reveal reports has received nearly $250 million in contracts to transport immigrant children since 2014.

Human Rights Lawyer Jennifer Harbury on How Trump Is Punishing Cartels’ Victims—Not Their Members
A federal judge will hold a hearing today on whether to delay Tuesday’s deadline that mandated the reunification of all children under the age of 5 whom the Trump administration separated from their parents at the border. The Trump administration is claiming it needs more time to match children with their parents, including at least 19 parents who have already been deported. The American Civil Liberties Union says less than half of separated children under the age of 5 will be reunited by the Tuesday deadline. As Trump’s “zero tolerance” policy crackdown continues, human rights lawyer Jennifer Harbury talks about how U.S. foreign policy has led to the violence that Central Americans are fleeing, and what happens when people follow the U.S. government’s instructions and attempt to apply for political asylum at a legal port of entry.

From CIA-Backed Wars to Cartel Violence: Inside the Roots of the Refugee Crisis in Central America
Across the United States, thousands of migrant children remain detained alone after the Trump administration forcibly separated them from their parents at the border. Yet, despite the news about the United States’ human rights abuses of migrants, asylum seekers keep risking the dangerous journey to the United States. Texas-based human rights lawyer Jennifer Harbury has lived in the Rio Grande Valley in Texas for more than 40 years and has long worked with people fleeing violence in Guatemala, El Salvador and Honduras. She also knows intimately the U.S. roots of this conflict. Her husband, Efraín Bámaca Velásquez, was a Mayan comandante and guerrilla who was disappeared after he was captured by the U.S.-backed Guatemalan army in the 1980s. After a long campaign, she found there was U.S. involvement in the cover-up of her husband’s murder and torture.