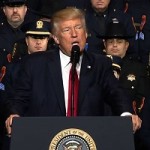 Donald Trump is facing widespread criticism from police chiefs across the country following a speech he gave on Friday that appeared to openly endorse police brutality. Commenting on the need to crack down on gang members, Trump suggested that police officers have license to use excessive force on suspects.

Retired Police Detective: Trump’s Comments Endorsing Police Brutality are “Treasonous”
Donald Trump is facing widespread criticism from police chiefs across the country following a speech he gave on Friday to police officers in Long Island, New York, that appeared to openly endorse police brutality. Commenting on the need to crack down on gang members, Trump suggested that police officers have license to use excessive force on suspects. The remarks come amid a controversial roundup of undocumented minors in Suffolk County, where Trump spoke, who were detained based on unconfirmed allegations of gang affiliation by local police. Trump painted what some say was an overblown picture of gang violence in the community. Following Trump’s remarks, the Suffolk County Police Department tweeted, “As a department, we do not and will not tolerate roughing up of prisoners.” The International Association of Chiefs of Police and the Police Foundation also criticized Trump’s speech, along with the police chiefs of New York, Boston, New Orleans, Houston, Los Angeles and other cities.

“Billion-Dollar Mistake”: Democrats Neglect People of Color While Failing to Woo White Trump Voters
As the Democrats prepare for the 2018 midterms, some ask whether the party is making a mistake by prioritizing the pursuit of wavering white voters over investing in and inspiring African-American voters. Last week in Virginia, party leaders unveiled their new slogan—”A Better Deal”—and rolled out an agenda to win back working-class voters they lost to President Donald Trump in November. The rebranding effort comes as the Democrats have lost all four special congressional elections this year to Republicans. The defeats come despite Trump’s approval rating dipping to 36 percent. It’s the lowest six-month approval rating of a U.S. president in 70 years. Steve Phillips of Democracy in Color says the party has invested $750 million on the 2018 midterms without addressing the Democrats’ core problem of connecting with disillusioned voters. Phillips is the author of the New York Times best-selling book “Brown is the New White: How the Demographic Revolution Has Created a New American Majority.”

Is Trump Trying to Sabotage the Nuclear Deal to Lay Groundwork for War With Iran?
The White House appears ready to abandon the landmark Iranian nuclear deal in favor of what experts say could lead to war with Iran. The New York Times reported last week that President Donald Trump has instructed his national security aides to find a rationale for declaring that Iran is violating the terms of the accord. The order came despite the fact the Trump administration reluctantly certified that Iran has complied with its obligations under the agreement earlier this month. Last week, Trump intensified his threats against Iran during a speech in Youngstown, Ohio. Observers say Trump’s actions are laying the groundwork for a disastrous military confrontation with Iran.