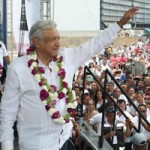 Leftist Andrés Manuel López Obrador Wins Mexican Presidential Election in Landslide Victory
In Mexico, leftist politician Andrés Manuel López Obrador, known as AMLO, has claimed victory after winning Sunday’s presidential election by a landslide, vowing to transform Mexico by reducing corruption and violence. Preliminary election results show López Obrador, the former mayor of Mexico City, capturing 53 percent of the vote—more than twice that of his closest rival. His three main rival candidates have already conceded. His victory comes after the most violent electoral season in modern Mexican history. At least 136 politicians have been assassinated in Mexico since September.

“Families Belong Together”: Tens of Thousands Across the U.S. Protest Trump’s Zero Tolerance Policy
Tens of thousands of protesters marched in cities across the United States on Saturday for a “Families Belong Together” rally to demand the Trump administration comply with a federal judge’s ruling that all migrant children separated from their parents must be reunited. The Trump administration’s “zero tolerance” policy led to the forcible separation of more than 2,000 children from their parents, some of whom have already been deported. The protests came 24 hours after the Trump administration said in a court filing on Friday that it has the right to hold children in detention with their parents for the duration of their immigration proceedings, which can take months or years. Current law prevents children from being held for more than 20 days. Democracy Now! was in the streets of Washington, D.C., where tens of thousands rallied.

Thousands in New York March Against Family Separation, Immigration Crackdown at Border
In New York City Saturday, more than 10,000 people marched across the Brooklyn Bridge to protest the Trump administration’s immigration crackdown and to demand the reunification of all migrant children separated from their parents during the Trump administration’s “zero tolerance” crackdown.

“It’s a Humanitarian Crisis”: Texas Lawyer Describes Chaos, Terror of Family Separation at Border
At least 2,000 migrant children remain separated from their parents, after the families were forcibly separated by immigration officials under President Trump’s “zero tolerance” policy. A federal judge has ordered all these children must be reunited with their parents within 30 days—but immigration advocates say the administration does not have a clear plan for how to reunite the families. In McAllen, Texas, immigration lawyers are scrambling to help their clients find and reunite with their children.