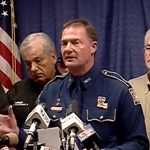 In Baton Rouge, three police officers were killed and three others were wounded in a shooting rampage on Sunday following more than a week of protests against police violence that were sparked by the fatal shooting of Baton Rouge resident Alton Sterling by police. According to reports, the officers were responding to a 911 call of shots fired when they were ambushed by a gunman. Officials identified the gunman as Gavin Long of Kansas City, Missouri. 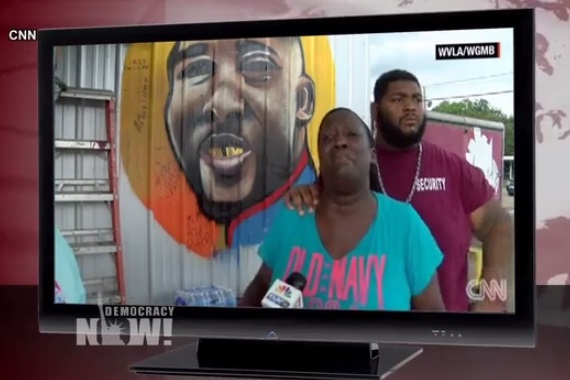 In Baton Rouge, three police officers were killed and three others were wounded in a shooting rampage on Sunday following more than a week of protests against police violence that were sparked by the fatal shooting of Baton Rouge resident Alton Sterling by police. According to reports, the officers were responding to a 911 call of shots fired when they were ambushed by a gunman. Officials identified the gunman as Gavin Long of Kansas City, Missouri. Long, who was African-American, served in the Marines from 2005 to 2010, reaching the rank of sergeant. He deployed to Iraq from June 2008 to January 2009, according to military records, and was awarded several medals, including one for good conduct, and received an honorable discharge.

Amy Goodman discussed the killing of police officers in Baton Rouge and the recent nationwide protests against police brutality with Cornel West. Cornel West is a professor at Union Theological Seminary. “When I hear the authorities call for peace,” West said, “I say, yes, but it’s not the absence of tension. It’s got to be the presence of that justice and accountability.” West also explained why he is endorsing Jill Stein, the Green Party’s presidential candidate.

Following Sunday’s killing of three police officers in Baton Rouge on Sunday, after a week of protests sparked by the fatal shooting by police of resident Alton Sterling, Amy Goodman spoke with former Ohio State Senator Nina Turner, who is in Cleveland, where Democracy Now! is covering the Republican National Convention. Her son is a police officer, and her husband is a retired police officer. “Good police officers prop up bad police officers, and they won’t tell, they won’t talk about what is wrong within this system,” Turner says. “We have to have good police officers call out their sisters and brothers who may be doing things wrong.”

Meanwhile, Turkey remains in a state of crisis three days after soldiers staged an attempted coup commandeering tanks, attack helicopters and fighter jets in a bid to seize power. The coup began while Turkish President Tayyip Erdogan was vacationing at a seaside resort. The mutinous faction of the military said it had taken action to protect democracy from Erdogan. In the midst of the coup, Erdogan spoke to the nation via the FaceTime app on his iPhone after he narrowly escaped being captured by soldiers who arrived at his seaside hotel just after he left. He called on his supporters to take to the streets in protest, and returned to Istanbul. Since the coup failed, Turkey has arrested 6,000 people, including senior members of the judiciary and military.

The Obama administration has finally declassified 28 pages from the September 11 report detailing possible ties between the Saudi government and the 9/11 attacks. The report states: “Prior to September 11th, the FBI apparently did not focus investigative resources on [redacted text] Saudi nationals in the United States due to Saudi Arabia’s status as an American ‘ally.'” Fifteen of the 19 men who hijacked planes on 9/11 were from Saudi Arabia. Speaking on Friday, White House Press Secretary Josh Earnest downplayed the importance of the declassified documents. The declassified documents raise new questions about the role of Fahad al-Thumairy, a Saudi consular official based in the Los Angeles area. Al-Thumairy personally helped two of the hijackers after they arrived in Los Angeles in early 2000. The document also reveals details about an incident in 1999 when a flight from Phoenix to Washington, D.C., was forced to make an emergency landing after a Saudi man attempted to enter the cockpit twice.

Finally, Democracy Now! is preparing to cover the Republican National Convention in Cleveland, Ohio. The FBI, the Department of Homeland Security and the Secret Service have reportedly knocked on the doors of dozens of Cleveland activists, demanding to know if they are organizing protests at the Republican National Convention. Law enforcement agents have reportedly also made phone calls to relatives, neighbors and places of employment, asking about the activists’ whereabouts. Many of the activists say they have no involvement in the RNC protests and are being targeted for their prior work with the local chapter of Black Lives Matter and the Occupy Wall Street movement. On Sunday, Democracy Now!’s Deena Guzder and Elizabeth Press spoke to activists Robin Adelmann and Samuel Carpenter, who say they were targeted by the FBI. Democracy Now! also sat down with the NAACP’s Michael Nelson and National Lawyers Guild’s Jocelyn Rosnick.

At least 19 corporations that usually sponsor the event have dramatically scaled back or canceled their commitments, citing Donald Trump’s controversial comments about women, immigrants and minorities. Last week, a leaked letter from the Cleveland host committee asked billionaire backer Sheldon Adelson to help cover a $6 million shortfall, and listed more than a dozen corporate and individual donors who have withdrawn their pledges, including Coca-Cola, Pepsi, FedEx and Visa. Other companies who sponsored the 2012 RNC but say they will not be returning this year include Apple, Wells Fargo, UPS, Motorola, JPMorgan Chase, Walgreens and Ford.