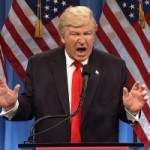 On Friday, the White House took the unprecedented act of barring The New York Times, CNN, Politico, the Los Angeles Times, the BBC and several other news organizations from an off-camera briefing known as a gaggle. Meanwhile, several right-wing news outlets were allowed to attend.

Committee to Protect Journalists: Trump’s Attacks on Media Will Be Felt by Journalists Around World
On Friday, the White House took the unprecedented act of barring The New York Times, CNN, Politico, the Los Angeles Times, the BBC and several other news organizations from an off-camera briefing known as a gaggle. Meanwhile, several right-wing news outlets were allowed to attend, including Breitbart, The Washington Times and One America News Network. Just hours earlier, Trump repeatedly attacked the media, describing it as an “enemy of the people.” Then, on Saturday, Donald Trump announced he would not attend this year’s White House correspondents’ dinner. The last president to skip the dinner was Ronald Reagan in 1981. At the time, Reagan was recovering from an assassination attempt.

Rev. William Barber: The NAACP Will Boycott North Carolina over HB2 & Voter Suppression
The NAACP has announced it would not hold its convention in North Carolina and urged an international boycott of the state to protest North Carolina’s anti-trans bathroom bill and a series of anti-democratic actions taken by the state’s Republican Legislature. The civil rights group described the move as the first step in an economic boycott that could be expanded in North Carolina and replicated in other states that enact laws limiting voting rights and protections for gay and transgender people. North Carolina’s House Bill 2, known as the “bathroom bill,” bars transgender people from using the bathrooms that match their gender identity. The NAACP has also accused Republican legislators of committing voter suppression and racial gerrymandering.

Rev. William Barber on the “Season of Hate & Political Violence” Under Trump
The Southern Poverty Law Center recently revealed the number of hate groups in the United States has tripled in the past year in part due to Donald Trump’s candidacy and election. Rev. William Barber of the NAACP in North Carolina responds to the rising hate across the country.

Keith Ellison Loses DNC Chair Race After Smear Campaign over His Support for Palestinian Rights
Former Labor Secretary Tom Perez has been elected to lead the Democratic National Committee, beating out Minnesota Congressmember Keith Ellison in a contentious second-round vote that is seen as determining the future of the Democratic Party. Congressmember Ellison is the co-chair of the Congressional Progressive Caucus and the first Muslim elected to Congress. He was widely backed by supporters of Senator Bernie Sanders and the Democratic Party’s more progressive wing. Perez was backed by the party’s establishment, including President Obama. He becomes the first Latino head of the Democratic Party. After Saturday’s contentious vote—which marked the first time in more than 30 years that the outcome was not known ahead of balloting—Ellison’s supporters erupted in protest, chanting “Party for the people, not big money.”