In a Democracy Now! exclusive, Amy Goodman interviews Albert Woodfox of the Angola Three. He has just been released after 43 years in solitary confinement, during which his conviction was quashed three times. 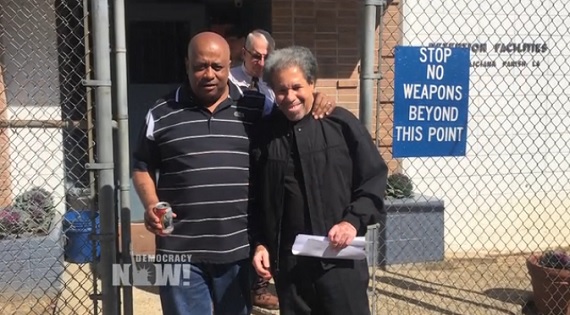 In a Democracy Now! exclusive, Amy Goodman interviews Albert Woodfox of the Angola Three. Albert has just been released after 43 years in solitary confinement, during which his conviction was quashed three times.

Woodfox was serving a five-year-sentence for armed robbery at Angola State Penitentiary when he and fellow inmate Herman Wallace were accused in 1972 of stabbing prison guard Brent Miller. The two men always maintained their innocence, saying they were targeted because of their attempts to address horrific conditions in the former slave plantation by organizing a chapter of the Black Panther Party.

Woodfox is the last the Angola Three to be released. The third prisoner, Robert King, was freed when his conviction was overturned in 2001 and he was exonerated of charges that he had killed a fellow inmate. Wallace was freed in 2013, just days before he died from cancer.

Miller’s widow, Leontine Verrett, said in a statement, “I think it’s time the state stop acting like there is any evidence that Albert Woodfox killed Brent.”