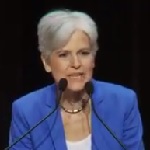 In Houston, Texas, Dr. Jill Stein formally accepted the Green Party’s nomination for president at the party’s convention. Interest in the Green Party has jumped in recent weeks since Hillary Clinton won the Democratic nomination, defeating Bernie Sanders. In 2012, Dr. Stein won less than 1 percent of the national vote. But according to CNN’s Poll of Polls, she is now polling at 5 percent. 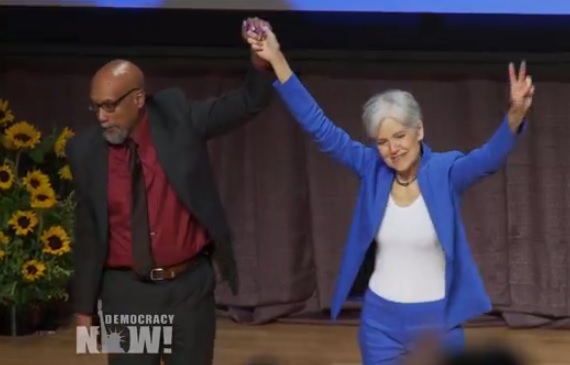 In Houston, Texas, Dr. Jill Stein formally accepted the Green Party’s nomination for president at the party’s convention over the weekend. Interest in the Green Party has jumped in recent weeks since Hillary Clinton won the Democratic nomination, defeating Bernie Sanders. In 2012, Dr. Stein ran on the Green ticket and won less than 1 percent of the national vote. But according to CNN’s Poll of Polls, Stein is now polling at 5 percent.

The same poll finds Clinton at 45 percent, Republican Donald Trump at 35 percent and Libertarian Gary Johnson at 9 percent. Neither Stein nor Johnson will be invited to take part in this fall’s presidential debates, however, unless they top 15 percent in national polls. For more, we hear excerpts of Dr. Jill Stein speaking at the Green Party convention. CNN’s Poll of Polls shows Stein polling at 5 percent—five times more than the 1 percent of the national vote she won in 2012.

The Green Party nominated human rights activist Ajamu Baraka to be Dr. Jill Stein’s vice-presidential running mate during the party’s convention in Houston, Texas, over the weekend. Baraka is the founding executive director of the US Human Rights Network and coordinator of the U.S.-based Black Left Unity Network’s Committee on International Affairs. He has served on the boards of Amnesty International USA, the Center for Constitutional Rights and Africa Action.

WikiLeaks founder Julian Assange spoke via video stream at the Green Party convention in Houston, Texas, over the weekend. Assange has been confined to the Ecuadorean Embassy in London for more than four years, fearing that if he were to attempt to leave, he would be arrested by British police and ultimately extradited to the U.S., where it is believed there is a sealed indictment against him over WikiLeaks’ release of documents.

Assange was speaking with former Green Party presidential candidate David Cobb. He began by speaking about WikiLeaks’ release of 20,000 internal DNC emails; then he also spoke about his book “When Google Met WikiLeaks” and the relationship between Hillary Clinton, the State Department and the internet giant Google. He also predicted that attacks against Green Party nominee Dr. Jill Stein would surge ahead of November’s election.