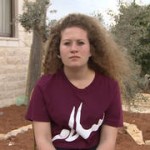 Seventeen-year-old Palestinian activist Ahed Tamimi has been freed from Israeli prison after eight months behind bars. Tamimi became a hero to Palestinians and people around the world last year after a viral video showed her slapping a heavily armed Israeli soldier near her family’s home. The incident came just after Tamimi learned her cousin had been gravely wounded by an Israeli soldier.

Seventeen-year-old Palestinian activist Ahed Tamimi has been freed from Israeli prison after eight months behind bars. Known to some as the Rosa Parks of Palestine, Tamimi became a hero to Palestinians and people around the world last year after a viral video showed her slapping a heavily armed Israeli soldier near her family’s home in the occupied West Bank. The incident came just after Tamimi learned her cousin had been gravely wounded by an Israeli soldier who shot him in the head using a rubber-coated steel bullet. Video of Tamimi confronting the soldier went viral, elevating her into a symbol of Palestinian resistance. Ahed was soon arrested in the middle of the night and charged with assault in an Israeli military court. She was sentenced to eight months in an Israeli prison and celebrated her 17th birthday behind bars. Her mother was also arrested and charged for incitement, in part for streaming video online showing the interaction between Tamimi and the Israeli soldier. Tamimi and her mother, Nariman, were released in late July.

Venezuelan Pres. Nicolás Maduro Targeted in 1st Assassination Attempt by Drone Against Head of State
Venezuelan President Nicolás Maduro survived an apparent assassination attempt Saturday. Officials say two drones loaded with explosives detonated above Maduro as he gave a nationally televised speech at a military event in Caracas. It was the first known attempted assassination by drone strike against a sitting head of state. Guests are Alejandro Velasco, executive editor for NACLA Report on the Americas; Gabriel Hetland, assistant professor of Latin American studies at SUNY Albany; and Mark Weisbrot, co-director of the Center for Economic and Policy Research and president of Just Foreign Policy.

“Earth Will Be Annihilated”: On 73rd Anniversary of Hiroshima Bombing, a Warning Against Nuclear War
Today marks the 73rd anniversary of the United States’ atomic bombing of Hiroshima on August 6, 1945, which killed 140,000 people and seriously injured another 100,000. Koji Hosokawa, a Hiroshima survivor, or hibakusha, was 17 years old when the U.S. dropped the atomic bomb on Hiroshima. His 13-year-old sister Yoko died in the bombing. He gave a tour of the city when Democracy Now! was in Japan in 2014. He spoke near the A-Bomb Dome in Hiroshima, one of the few structures in the city that survived the atomic blast.