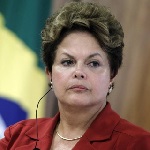 Embattled Brazilian President Dilma Rousseff is slated to testify today at her impeachment trial—a trial that many are calling a coup by her right-wing political rivals. Rousseff has denounced the proceedings. She was suspended earlier this year and has maintained her innocence, accusing her political opponents of spearheading the proceedings to shield themselves from prosecution and undo years of progressive policies. 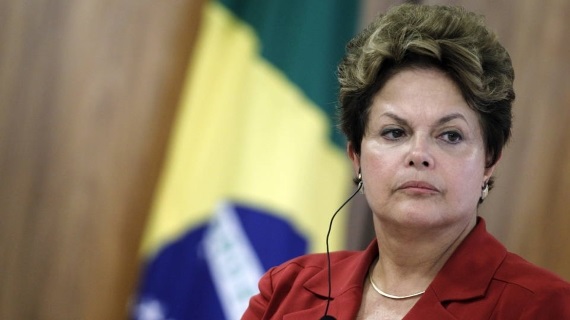 Dilma Rousseff is due to take the stand at her impeachment trial. Image from Democracy Now! website.

Embattled Brazilian President Dilma Rousseff is slated to testify today at her impeachment trial—a trial that many are calling a coup by her right-wing political rivals. Rousseff has denounced the proceedings and called for early elections to unite the country. Rousseff’s impeachment stems from accusations she tampered with government accounts to hide a budget deficit. She was suspended earlier this year and has maintained her innocence, accusing her political opponents of spearheading the proceedings to shield themselves from prosecution and undo years of progressive policies.

The Brazilian group Transparency Brazil says 60 percent of Brazilian lawmakers are currently under criminal investigation or have already been convicted of crimes ranging from corruption to election fraud. Rousseff’s opponents now need 54 votes, or two-thirds of the 81-seat Senate, to convict her of violating budget laws. Her impeachment would end 13 years of left-wing Workers’ Party rule in Brazil and bring to power interim President Michel Temer for the remaining two years of Rousseff’s term. Temer is also deeply unpopular and currently under investigation himself, accused of receiving illegal campaign contributions linked to the state oil company Petrobras.

Earlier this month, Vermont Senator Bernie Sanders strongly denounced the impeachment of Brazil’s democratically elected president. In a statement posted on his Senate website, Sanders laid out his position as “calling on the United States to take a definitive stand against efforts to remove Brazilian President Dilma Rousseff from office.” He added, “To many Brazilians and observers the controversial impeachment process more closely resembles a coup d’état.” The Intercept’s Glenn Greenwald joins the show from Rio. His most recent piece is headlined “Why Did the Saudi Regime and Other Gulf Tyrannies Donate Millions to the Clinton Foundation?”

Questions surrounding Hillary Clinton and the Clinton Foundation continue to grow. On Sunday, Democratic National Committee interim chairperson Donna Brazile defended Clinton’s meetings as secretary of state with Clinton Foundation donors, saying, “When Republicans meet with their donors, with their supporters, their activists, they call it a meeting. When Democrats do that, they call it a conflict.”

Donna Brazile’s comments come in response to an Associated Press investigation revealing that while Hillary Clinton served as secretary of state, more than half of the private citizens she met with during the reporting period had donated to the Clinton Foundation. The AP investigation comes after a three-year battle to gain access to State Department calendars. The analysis shows that at least 85 of 154 people Hillary Clinton had scheduled phone or in-person meetings with were foundation donors.