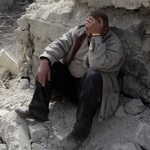 Today’s show begins in Syria, where Israeli F-15 bomber jets have reportedly bombed a Syrian air base used by Iranian forces. There are reports that 14 people died in the strikes, including Iranian nationals. Israel is said to have launched the raid from Lebanon’s airspace.

Glenn Greenwald on Syria: U.S. & Israel Revving Up War Machine Won’t Help Suffering Syrian Civilians
Today’s show begins in Syria, where Israeli F-15 bomber jets have reportedly bombed a Syrian air base used by Iranian forces. There are reports that 14 people died in the strikes, including Iranian nationals. Israel is said to have launched the raid from Lebanon’s airspace. The Israeli bombing came a day after a suspected chemical weapons attack killed at least 60 people and wounded more than 1,000 in the Syrian town of Douma, the last rebel-held town in Eastern Ghouta. The Syrian opposition blamed the Assad government for carrying out the attacks, but Syria denied having any role. The chemical attack came one day after Syrian forces launched an air and ground assault on Douma. While international officials are still investigating what happened, President Trump took to Twitter to directly accuse Russian President Vladimir Putin of playing a role. The U.N. Security Council is meeting today to discuss the crisis in Syria. Today also marks John Bolton’s first day as President Trump’s national security adviser.

Glenn Greenwald: Brazil’s Right Wing Jailed Ex-President Lula Because They Couldn’t Win at the Polls
In Brazil, former Brazilian President Luiz Inácio Lula da Silva has begun serving a 12-year sentence for a controversial corruption conviction. After missing a 5 p.m. Friday deadline, Lula turned himself in to police on Saturday following a standoff during which he spent the night in São Paulo’s steelworkers’ union building. Lula’s supporters gathered outside, many hoping he would defy orders to surrender. On Saturday, Lula addressed thousands of his supporters and members of his Workers’ Party. Last week, the Supreme Court rejected Lula’s bid to stay out of jail while he appealed his conviction, effectively removing him from Brazil’s presidential election later this year, where he was the front-runner. Lula is a former union leader who served as president of Brazil from 2003 to 2010. During that time, he helped lift tens of millions of Brazilians out of poverty. His supporters say the ruling against him is a continuation of the right-wing coup that ousted Lula’s ally, President Dilma Rousseff, from power in 2015. Last year, Rousseff said, “The first chapter of the coup was my impeachment. But there’s a second chapter, and that is stopping President Lula from becoming a candidate for next year’s elections.”

“Apartheid, Rogue, Terrorist State”: Glenn Greenwald on Israel’s Murder of Gaza Protesters, Reporter
On Saturday, hundreds of mourners gathered in Gaza for the funeral of Palestinian journalist Yaser Murtaja, who was fatally shot by the Israeli army while covering a fresh round of deadly protests along the Israel-Gaza border. Photos show the 30-year-old journalist was wearing a flak jacket clearly marked ”PRESS” at the time of the shooting. He’s one of at least nine Palestinians who were killed by the Israeli army during its brutal crackdown against Friday’s protests. The Palestinian Health Ministry says Israeli forces have killed 31 people in total since Palestinians kicked off a 6-week-long nonviolent protest late last month, dubbed “The Great March of Return.” Both the International Criminal Court and the United Nations have rebuked Israel in recent days and warned its actions on the border could violate international human rights conventions.