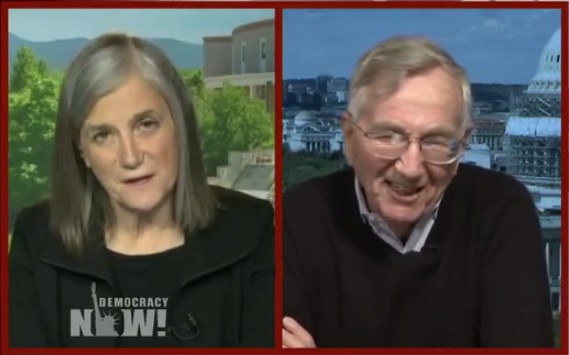 I just don’t think it’s the way to go. I think it’s just putting us into—you know, as you mentioned in your introduction, we’ve been doing this war against terror, against an idea, since after 9/11, you know? And how are we doing, fellas? How’s it going there? You know, has the amount of opposition to us spread? Has the hatred of America grown more intense? We are truly a very much hated country in the Middle East. And it’s partly because of the way we fight our wars—with drone attacks and a lot of force, the prisons that we did. And Abu Ghraib was just one of many prisons. And a lot of killing goes on by us, you know.

Hersh then discussed the phenomenon of Bernie Sanders’ candidacy, describing it as “amazing,” and suggesting that a progressive campaign might finally succeed. He also spoke about his new book, The Killing of Osama bin Laden, in which he explores the holes in the official U.S. narrative.