On April 7, Bill Clinton was challenged by activists protesting the Clintons’ involvement in the 1994 crime bill that caused a huge increase in incarcerations. 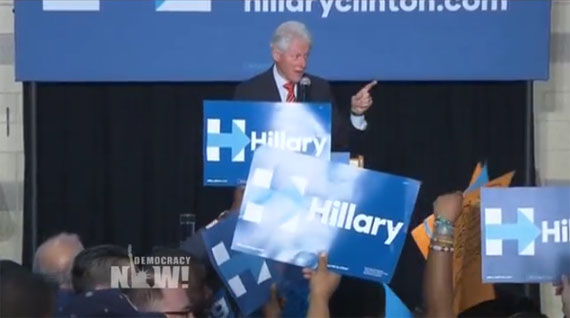 Bill Clinton responding to challenges on his and Hillary Clinton’s record on incarceration.

Democracy Now! has embarked on a 100-city tour celebrating its 20th anniversary on the air. Today the show was in Los Angeles, as Amy Goodman interviewed Black Lives Matter organizer Melina Abdullah. On April 7, Bill Clinton’s speech in support of his wife was interrupted by activists protesting the Clintons’ involvement in the 1994 crime bill that caused a huge increase in incarcerations. The former President responded by accusing the campaigners of defending criminals. The following day, he expressed regret for some of his remarks, but fell short of apologizing. Melina Abdullah made this comment:

So, as one who was coming of age myself in the ’90s, as one who lived in East Oakland, a space where these kinds of conditions that he describes were really part of my everyday experience, one of the things that he is very good at, and neoliberal politicians are very good at, is kind of distracting us from the real issues, distracting us from how systems create these conditions. So they act as if the young folks who wind up, you know, committing crimes committed crimes because they simply were out of control, committed crimes as if they weren’t human beings. So this term “superpredator,” again, dehumanizes our children, dehumanizes our people. And so, it acts as if we’re behaving in ways that are not simply as a result of the conditions that we experience.

And so, we need to turn the tables and look back at policymakers; look back at systems that create oppressions in the first place, that create hollowed-out communities where there are no resources, where there are no livable-wage jobs, where there are no after-school programs; look at the policies of the Clinton administration rolling back the kinds of resources that I would have benefited from, and many of my peers would have benefited from, in kind of moving forward. And so, rather than looking at so-called 13-year-old superpredators, which, you know, we know is a term that’s used for black youth—this is dog-whistle politics, right?—we need to look at policies that don’t provide the resources that we need, that began in the ’90s but continue to today. So the crime bill is another example of it, right? So, we’re blaming people for being in prison, we’re blaming people for being poor, we’re blaming people for not having access to resources, when we’re not looking at the policymakers themselves who create the conditions that hold back resources from communities.

There was a further discussion on the six Black Lives Matter activists recently tried in Los Angeles on misdemeanor charges for barricading the 101 freeway. The police tactics used on the protesters included surveillance and have been criticized as targeting the campaign.

Also, as Secretary of State John Kerry visits Japan, the show asks whether the mass detention of Japanese Americans that happened in World War II could occur again with Muslims, given Republican candidates’ rhetoric.