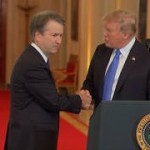 Roe v. Wade in Danger: Released Docs Reveal Kavanaugh Thinks Abortion Decision Is Not “Settled Law”
Supreme Court nominee Brett Kavanaugh’s confirmation hearing took a series of dramatic turns Thursday, as Democratic senators began releasing confidential documents from Kavanaugh’s work at the George W. Bush White House. The New York Times also broke a major story Thursday morning revealing that Kavanaugh wrote as a White House attorney in 2003 that he did not deem the Supreme Court’s landmark Roe v. Wade abortion rights decision to be “settled law of the land.” He wrote, “I am not sure that all legal scholars refer to Roe as the settled law of the land at the Supreme Court level since Court can always overrule its precedent, and three current Justices on the Court would do so.” These revelations come as the Trump administration withholds more than 100,000 pages of Kavanaugh’s records on the basis of presidential privilege. Kristen Clarke is president and executive director of the Lawyers’ Committee for Civil Rights Under Law. Last week, the organization released a damning report on Kavanaugh’s record on cases concerning civil rights.

As 400+ Children Remain Separated From Parents, Trump Admin Wants to Detain Kids Indefinitely
The Trump administration is attempting to remove court-imposed time limits on the detention of immigrant children. The administration’s proposal would allow immigrant families to be held in detention indefinitely, ending the long-standing 1997 Flores agreement which says that children cannot be jailed for more than 20 days. More than 400 children remain separated from their parents more than a month after a court-imposed deadline requiring the Trump administration to reunite all of the separated families. The American Civil Liberties Union says it appears ICE officials had access to the phone numbers of hundreds of parents of separated children before a federal court’s June 26 family reunification deadline, but intentionally withheld the phone numbers for months. Cathleen Caron is founder & executive director of Justice In Motion, a group spearheading an effort to find parents of detained children.

Idlib on Brink of “Humanitarian Catastrophe” As Syrian Military Threatens to Invade Rebel-Held City
The leaders of Russia, Iran and Turkey are meeting today in Tehran as the Syrian military is threatening a massive invasion of the rebel held city of Idlib. Russia and Iran are close allies to Syria while Turkey has been a key supporter of the opposition. This comes as the United States will chair a U.N. Security Council meeting today on the crisis in Syria. The U.N. is warning that an assault on Idlib could lead to a humanitarian catastrophe. U.N. special envoy for Syria Staffan de Mistura said that if talks in Tehran fail, as many as 800,000 citizens may flee the region and that panic is spreading among Idlib’s 3 million residents. Meanwhile, the Washington Post reports that President Trump has agreed to a new strategy that indefinitely extends the U.S. military effort in Syria in part to push out Iranian forces from Syria. Award-winning journalist Rania Abouzeid is in Beirut. She’s the author of “No Turning Back. Life, Loss, and Hope in Wartime Syria.” She has reported extensively from Syria since the uprising began in 2011, and has received the George Polk Award in 2014 and the Michael Kelly Award in 2015 for her coverage.