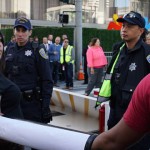 “Climate Capitalism is Killing Our Communities”: Protesters Disrupt Gov. Brown’s SF Climate Summit
As California Governor Jerry Brown’s Global Climate Action Summit kicked off Thursday, indigenous and climate justice activists blocked the main entrance in protest. While the protests took place outside the GCAS, Gov. Brown and former New York Mayor Michael Bloomberg, the U.N. special envoy for climate action, were inside. Protesters disrupted Bloomberg’s speech at the summit’s main plenary. Democracy Now! was there, in the streets and at the conference.

Effective Tool to Limit Greenhouse Emissions or a “License to Pollute?”: A Debate on Cap-and-Trade
Protesters disrupted the Global Climate Action Summit Thursday, criticizing California Governor Jerry Brown in part for his support for cap-and-trade. Cap-and-trade is a market-driven strategy in which governments cap emission levels, then allow companies to buy and sell permits to pollute. California has the most far-reaching cap and trade program in the United States. Last year Governor Brown signed an extension to the state’s cap and trade law which began under Republican governor Arnold Schwarzenegger. Governor Brown has credited cap and trade with limiting the state’s greenhouse gas emissions, but the issue has split many environmental groups. Peter Miller, director of the western region climate and clean energy program for the Natural Resources Defense Council, debates with Eriel Deranger, founder and executive director of the group Indigenous Climate Action and a member of the Athabaskan Chippewa first nation.

Over 100 Indigenous Activists Decry California Gov. Jerry Brown’s Market-Based Climate Solutions
Over 100 indigenous and climate justice activists staged a protest in San Francisco Tuesday outside a meeting of California Governor Jerry Brown’s Climate and Forest Task Force. Protesters attempted to deliver a letter to Brown and task force members. Democracy Now! was there in the streets.

A Debate on Geoengineering: Should We Deliberately “Hack” Planet Earth to Combat Climate Change?
Sometimes called “climate manipulation,” geoengineering involves the deliberate altering of the earth to decrease the impact of greenhouse gas emissions. Such proposals are already being explored by government agencies, scientists, and businesses around the world. Supporters of geoengineering endorse radical ways to manipulate the planet, from spraying aerosols with sulfur particles into the stratosphere, to scrubbing carbon dioxide from the atmosphere. But critics say these “techno-fixes” do nothing to address the root causes of climate change, and worse, can be dangerous for the earth. This is a debate between Gopal Dayaneni, board member of the ETC Group and a founding member of the Climate Justice Alliance, and David Keith, professor of applied physics at Harvard’s School of Engineering and Applied Sciences and professor of public policy in the Harvard Kennedy School.