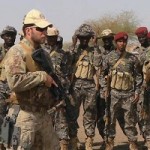 U.N. Ambassador Nikki Haley travels in Africa and the Senate Foreign Relations Committee held a classified briefing Thursday with Pentagon officials on the deadly ambush in Niger, where five Nigerian soldiers were killed along with four U.S. soldiers.

Neuroscientist Dr. Carl Hart: People Are Dying in Opioid Crisis Because of Politicians’ Ignorance
Donald Trump announced Thursday that he is directing the Department of Health and Human Services to declare the opioid crisis a public health emergency—walking back his plans, announced in August, to declare it a more serious “national emergency.” The shift means the federal government will not, as of now, direct any new federal funds to address the opioid crisis, which killed 64,000 Americans last year.