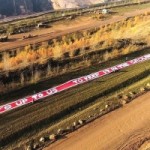 Throughout the United Nations climate summit in Bonn, Germany, activists have been protesting against fossil fuels. About 45 minutes west of Bonn, activists unfurled a banner at the largest open-pit coal mine in Europe that read, “It’s Up to Us to Keep It in the Ground.”

“Keep It in the Ground”: As COP23 Ends, Activists Protest at Europe’s Largest Open-Pit Coal Mine
Throughout the United Nations climate summit in Bonn, Germany, activists have been protesting against fossil fuels. Early this morning, Democracy Now! drove about 45 minutes west of Bonn to the forests of western Germany, where activists unfurled a banner at the largest open-pit coal mine in Europe that read, “It’s Up to Us to Keep It in the Ground.” “You can’t separate the peace movement from the climate movement,” says Lea Heuser, winner of Germany’s Aachen Peace Prize.

Activists Condemn Failure of COP23 to Address Interrelated Crises of Climate, Energy & Inequality
On the last day of the United Nations climate summit in Bonn, Germany, we get a wrap-up on negotiations. This year is the first COP since President Trump vowed to pull the United States out of the landmark 2015 Paris climate deal, a process which takes four years. At this year’s COP, a new coalition of 19 countries has committed to working toward phasing out coal, although many of these countries—including Britain—continue to expand fracking and other extraction projects. Also this week in Bonn, indigenous groups won increased recognition of their rights, autonomy and participation in negotiations. But many say this year’s negotiations do not go nearly far enough to address climate change—especially as new research shows the threat is continuing to accelerate.

Key Architect of Paris Climate Accord: “We Cannot Combat Climate Change with More Coal”
One of the key architects of the landmark 2015 Paris climate deal, Manuel Pulgar-Vidal, speaks about the final assessment of this year’s U.N. climate summit. He was previously the environment minister in Peru. He is also the former president of COP20 and a key architect of the Paris Agreement.

Tom Goldtooth: Carbon Trading is “Fraudulent” Scheme to Privatize Air & Forests to Permit Pollution
In South Dakota, the energy company TransCanada says it shut down part of its pipeline Thursday after a rupture spilled 210,000 gallons of oil in a field near Amherst. The pipeline carries a highly polluting form of oil called “diluted bitumen.” This comes amid a new report titled “Carbon Pricing: A Critical Perspective for Community Resistance,” which exposes the dangers of carbon trading, a scheme in which major companies purchase carbon credits from countries who agree to plant trees or protect existing forests.