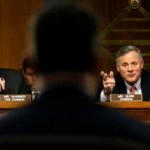 Trump has faced a growing crisis over allegations his campaign colluded with Russia ahead of the 2016 election. On Thursday, reports surfaced that former National Security Adviser Michael Flynn is seeking immunity from prosecution in exchange for his testimony to the FBI and congressional investigators.

Scholar: Moscow Sees Hypocrisy in Allegations After U.S. Interfered in Russian Elections in 1990s
In the 10 weeks since Donald Trump was sworn in as the nation’s 45th president, he has faced a growing crisis over allegations his campaign colluded with Russia ahead of the 2016 election. On Thursday, reports surfaced that former National Security Adviser Michael Flynn is seeking immunity from prosecution in exchange for his testimony to the FBI and congressional investigators. Meanwhile, The New York Times revealed one of Flynn’s former aides was one of two White House officials to secretly meet with Republican House Intelligence Committee Chair Devin Nunes last week on the White House grounds to show him secret U.S. intelligence reports.

Meanwhile, the Senate Intelligence Committee held its first public hearing Thursday on the issue. “If we want to understand Russia’s point of view, President Putin and those around him—and of course we do—whether or not we agree with it, we need to understand how our adversaries see us, how all other nations see us, through their eyes,” says our guest Robert David English, professor of international relations at the University of Southern California. “If we do that, we realize very quickly that their frame of reference has a lot to do with the mistakes and, yes, the U.S. interference in Russian politics in the ’90s, when we directly intervened in a presidential election to boost a losing candidate into a winning position—that was Boris Yeltsin.”

Rex Tillerson Fails to Acknowledge Concerns over Turkey’s Slide Toward Dictatorship in Ankara Visit
As U.S. Secretary of State Rex Tillerson visits Turkey this week, we look at how he has failed to raise concerns that the country may be sliding toward a dictatorship. Tillerson made no public mention of mass arrests of protesters, a purge of opponents that followed last year’s failed coup attempt, or a crackdown on the news media. This comes as Turkey continues to express frustration over U.S. support for Kurdish forces in Syria and Iraq, at the same time it says Kurdish militants are waging an insurgency inside Turkey. Turkey is set to hold a referendum next month on a constitutional overhaul that would give sweeping powers to President Erdogan and extend his presidency to 2029.

Is ICE Targeting Undocumented Activists for Arrest? Organizers Speak Out After 11 Days in Jail
Are immigration agents targeting undocumented organizers for their political work? That is the question many are asking after three prominent immigrant rights activists in Vermont were jailed by ICE in what local organizers are calling a clear case of political retaliation. Enrique Balcazar and Zully Palacios, who were freed Monday after spending 11 days in jail, appeared on the show. Both are leaders of the group Migrant Justice. They were arrested by undercover ICE agents in Burlington, Vermont, earlier this month as they were leaving the Migrant Justice office. Balcazar, who is known as Kike, serves on Vermont Attorney General T.J. Donovan’s immigration task force, which was created to respond to the Trump administration’s immigration policies. A third activist with Migrant Justice, Cesar Alex Carrillo, remains jailed after he was arrested by ICE earlier. We also speak with immigration attorney Matt Cameron.