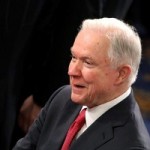 Attorney General Jeff Sessions has recused himself from any investigation into last year’s presidential campaign, following reports he met twice with Russia’s ambassador to the U.S. at a time when he was serving as both a senator and a campaign surrogate for Donald Trump. The revelation directly contradicts Sessions’ sworn testimony to Congress in January.

As Sessions Recuses Himself From Campaign Investigation, Questions Remain Over Trump-Russia Ties
Attorney General Jeff Sessions has recused himself from any investigation into last year’s presidential campaign, following reports he met twice with Russia’s ambassador to the U.S. at a time when he was serving as both a senator and a campaign surrogate for Donald Trump. The revelation directly contradicts Sessions’ sworn testimony to Congress in January that he did not meet with any Russian officials in the run-up to November’s election. On Thursday, Sessions called charges he lied under oath “totally false” and said he failed to mention the meetings with Ambassador Sergey Kislyak because the two did not discuss the campaign. Meanwhile on Thursday The New York Times revealed that Flynn and Trump’s son-in-law and senior adviser Jared Kushner held a meeting at Trump Tower with the Russian ambassador ahead of the presidential inauguration. “Do those relationships risk posing undue influence on him going forward, possibly, bribery or some kind of coercion on policy?” asks Marcy Wheeler, an independent journalist who covers national security and civil liberties at EmptyWheel.net.

Trump’s Proposed EPA Cuts Threaten Health & Lives of Tens of Millions of Americans
New details have emerged on the Trump administration’s plans to dramatically reduce the power of the Environmental Protection Agency. According to a leaked copy of the EPA’s 2018 budget proposal, the agency’s overall budget would be slashed by 25 percent. “The bottom line, if these cuts go through, we can almost guarantee with certainty that there will be more premature deaths and more sicknesses throughout the country,” says Bill Becker, executive director of the National Association of Clean Air Agencies. “The public should be outraged at that.” This comes as the Trump administration has vowed to roll back Obama-era EPA actions, and the White House continues to grapple with its position on the Paris climate agreement.

Revealed: Environmental Activist Berta Caceres’ Suspected Killers Received U.S. Military Training
We discuss a new investigation that reveals further ties between the killing of renowned environmental activist Berta Cáceres, Honduran military intelligence and the United States. Cáceres was assassinated one year ago in her home in La Esperanza, Honduras, just before midnight on March 2, 2016. She was the co-founder of COPINH, the Civic Council of Popular and Indigenous Organizations of Honduras. In 2015, she won the prestigious Goldman Environmental Prize for her decade-long fight against the Agua Zarca Dam, a project planned along a river sacred to the indigenous Lenca people. Eight men have been arrested as suspects in Cáceres’s killing — including one active army major and two retired military members. Two of these suspects reportedly received military training in the United States. Guest is Nina Lakhani, a freelance journalist who has been based in Mexico and Central America for the last four years. Her recent piece for The Guardian is, “Berta Cáceres court papers show murder suspects’ links to US-trained elite troops.”