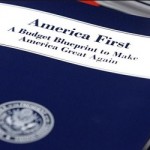 Donald Trump has unveiled his 2018 budget proposal to Congress, which calls for an unprecedented $54 billion increase in military spending while slashing environmental, housing, diplomatic and educational programs, and calling for the outright elimination of 19 agencies.

Trump’s Budget Director Mick Mulvaney Insists Cutting Meals for Poor Seniors is Compassionate
Donald Trump has unveiled his 2018 budget proposal to Congress, which calls for an unprecedented $54 billion increase in military spending while slashing environmental, housing, diplomatic and educational programs, and calling for the outright elimination of 19 agencies. The budget would also cut spending for the State Department and USAID by 28 percent, and slash billions of dollars in funding for the United Nations. The Office of Management and Budget director describes Trump’s proposal as an America First budget, even though numerous programs to help the poor are on the chopping block, including the Low Income Home Energy Assistance Program, which helps the poor pay for heat during the winter, the Legal Services Corporation, which funds free legal aid nationwide, and the Community Development Block Grant program, which partially funds Meals on Wheels to feed the elderly, poor, veterans and disabled. When asked about the cuts, OMB head Mick Mulvaney said they were “about as compassionate as you can get.”

Ralph Nader Denounces Trump Budget as Corporatist, Militarist & Racist: “The Mask is Off”
Longtime consumer advocate and former presidential candidate Ralph Nader responds to Donald Trump’s 2018 budget proposal to Congress, which calls for an unprecedented $54 billion increase in military spending while slashing environmental, housing, diplomatic and educational programs. “The mask is off. The fangs are now out,” Nader says. “He is collaborating with what is, on the record, the most vicious, ignorant Republican Party in its history, since 1854.”

Is Trump Counterterrorism Aide Sebastian Gorka a Sworn Member of Hungarian Nazi-Allied Group?
Is Donald Trump’s top counterterrorism adviser, Sebastian Gorka, a member of a Hungarian far-right, Nazi-allied group? Larry Cohler-Esses first reported the allegations in The Forward, a leading Jewish American newspaper. The outlet reports members of the Vitézi Rend elite order confirmed Gorka took a lifelong oath of loyalty to the Hungarian far-right group, which is listed by the U.S. State Department as having been “under the direction of the Nazi Government of Germany” during World War II. Questions first emerged about Gorka’s ties to the group after the website LobeLog published photographs of Gorka wearing a Vitézi Rend medal on his lapel at a presidential inauguration ball on January 20. Gorka has denied reports of his involvement with the group, but if he is found to have failed to disclose this in his immigration application, it could make him inadmissible to the country under the Immigration and Nationality Act. The revelation comes as Jewish community centers and synagogues around the U.S. reported another wave of bomb threats over the weekend.