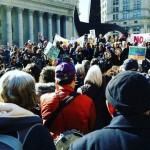 This segment begins with an update on the case of prominent immigrant rights advocate Ravi Ragbir, who was interviewed Thursday on Democracy Now! right before his check-in with a deportation officer. Ragbir, originally from Trinidad, immigrated to the United States legally but has a 15-year-old criminal conviction.

Immigrant Rights Leader Released After Hundreds Rally Outside His Check-in with Deportation Officer
This segment begins with an update on the case of prominent immigrant rights advocate Ravi Ragbir, who was interviewed Thursday on Democracy Now! right before his check-in with a deportation officer. Ragbir, originally from Trinidad, immigrated to the United States legally but has a 15-year-old criminal conviction. He’s avoided deportation since 2011 due to a series of stays that could end under President Trump. After he left our studios, Ragbir spoke at a press conference and rally, where hundreds gathered to support him before he went inside, unsure if he would come back out. He was accompanied to his check-in by his wife, his attorney, pastors and four elected officials. He emerged with mixed news. Even though he has a stay in place until 2018, he was told to return for another check-in next month. Officials also instructed Ragbir, who is married to a U.S. citizen and has a U.S.-born daughter, to prepare his travel documents, which are often the first step toward deportation.

Activists Defiant on Israel’s Travel Ban Targeting BDS Supporters: “It’s a Sign We’re Winning”
While President Trump has made international headlines for his attempt to temporarily ban refugees and residents of some Muslim-majority nations, one of Washington’s closest allies has instituted a travel ban of its own. Earlier this week, Israeli lawmakers approved a law barring supporters of the Boycott, Divestment and Sanctions movement, known as BDS, from entering Israel. The BDS movement is an international campaign to pressure Israel to comply with international law and respect Palestinian rights. The Israeli parliament voted to ban non-Israelis from entering the country if they, or any organizations they are a part of, support the boycott. After the law was passed, the Israeli parliament posted a message on its site reading, “In recent years calls to boycott Israel have been growing. It seems this is a new front in the war against Israel, which until now the country had not prepared for properly.”

Palestinian Hip-Hop Star Tamer Nafar Fights Racist Israeli Policies in New Film, “Junction 48″
We continue our conversation about Israel by looking at a film that’s just been released titled “Junction 48.” The film centers on Kareem, an aspiring Palestinian rap artist who lives in an impoverished, mixed Palestinian-Jewish city near Tel Aviv. “Junction 48″ shows how Kareem, his Palestinian girlfriend Manar and their friends use hip-hop to fight back against Israel’s policies. The role of Kareem is played by Tamer Nafar, a rap artist with the Palestinian hip-hop group DAM.

EFF Director: WikiLeaks Move to Share CIA Hacking Tools with Tech Giants Could “Make Us All Safer”
Electronic Frontier Foundation Executive Director Cindy Cohn discusses thousands of documents WikiLeaks published this week, dubbed “Vault 7,” that describe CIA programs to hack into both Apple and Android cellphones, smart TVs and even cars. Some of the released documents describe tools to take over entire phones, allowing the CIA to then bypass encrypted messenger programs such as Signal, Telegram and WhatsApp. Other documents outline a CIA and British intelligence program called “Weeping Angel,” through which the spy agency can hack into a Samsung smart television and turn it into a surveillance device that records audio conversations, even when it appears to be off. Other documents outline how the CIA has used the U.S. Consulate in Frankfurt, Germany, as a covert base to spy on Europe, the Middle East and Africa. “It’s extremely troubling that the CIA was keeping all of this information rather than giving it to the tech companies so that they could fix these problems and make us all safer,” Cohn notes.