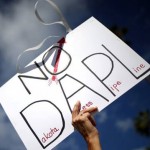 The Standing Rock Sioux Tribe has won a major legal victory in federal court which may have the power to force the shutdown of the $3.8 billion Dakota Access pipeline. District Judge James Boasberg ruled Wednesday that the Trump administration failed to conduct an adequate environmental review of the pipeline.

Standing Rock Sioux Chair on Militarized Repression & Ongoing Lawsuit to Stop Dakota Access Pipeline
The Standing Rock Sioux Tribe has won a major legal victory in federal court which may have the power to force the shutdown of the $3.8 billion Dakota Access pipeline. District Judge James Boasberg ruled Wednesday that the Trump administration failed to conduct an adequate environmental review of the pipeline, after Donald Trump ordered the Army Corps to fast-track and greenlight its approval. The judge requested additional briefings next week on whether the pipeline should be shut off until the completion of a full review of a potential oil spill’s impacts on fishing and hunting rights, as well as environmental justice. The pipeline faced months of massive resistance from the Standing Rock Sioux Tribe, members of hundreds of other indigenous tribes from across the Americas, as well as non-Native allies. Amy Goodman spoke with Standing Rock Sioux Chair Dave Archambault II and Nick Tilsen, executive director of the Thunder Valley Community Development Corporation and a citizen of the Oglala Lakota Nation on Pine Ridge Reservation in South Dakota.

Standing Rock Sioux Launch Wind & Solar Renewable Energy Projects After Winning Henry Wallace Award
Dave Archambault II, 45th chairman of the Standing Rock Sioux Tribe, and Nick Tilsen of the Thunder Valley Community Development Corporation, are in New York City for the Standing Rock Sioux to receive the inaugural Henry Wallace Award, which comes with a $1 million investment in renewable energy projects, like wind and solar, from the Wallace Global Fund. “What would be a dream or goal is to have all 12 communities powered off of renewables,” says Archambault. “At the community level, then at the national level, if tribes, Native tribal nations can say we are 100 percent powered and 100 percent that we consume renewable energy, that builds awareness for other communities and then maybe the nation.”

Rep. Ellison Responds to Scalise Shooting: Wild West Atmosphere of Firearm Regulation is Ridiculous
On Wednesday, a rifle-wielding man opened fire on Republican lawmakers during a congressional baseball practice, wounding Rep. Steve Scalise of Louisiana and four others. The assailant, James Hodgkinson, died after officers in Scalise’s security detail fired back at him. The attack has reignited the debate over gun control. Scalise has an A+ rating from the National Rifle Association, which opposes gun-control measures. Congressmember Keith Ellison has been slammed by the NRA as an “Anti-Second Amendment Radical,” but he says he has been mischaracterized.

Keith Ellison: GOP Is Pushing “Tax Cut Wrapped in Veneer of a Healthcare Bill” Under Extreme Secrecy
Donald Trump and top Republican lawmakers are continuing their push to repeal and replace the Affordable Care Act under extreme secrecy, and some senators say they have no idea what the new version of Trumpcare will include. It is “essentially a tax cut wrapped in the veneer of a healthcare bill,” argues Rep. Keith Ellison, Minnesota Democratic congressmember and co-chair of the House Progressive Caucus. He’s the first Muslim member of Congress. “Call your senator. Get involved, because this thing is probably going to go quick once it starts.”

Did Trump Violate Emoluments Clause from Day One by Receiving Payments to Trump Hotels, Trademarks?
Congressmember Keith Ellison is among nearly 200 Democratic lawmakers who are suing President Donald Trump, accusing him of violating the Emoluments Clause of the Constitution by accepting millions of dollars in payments from foreign governments to his companies while serving as U.S. president. The suit alleges that Trump accepted foreign payments which benefit him directly, without first obtaining consent from Congress.

Democrats Launch “Resistance Summer” Focused on Healthcare, Education & Social Security
As Trump goes to Miami today to announce the closing down of the opening of the relationship between Cuba and the United States, that President Obama started, after 50 years, we get Rep. Keith Ellison says Trump is “dragging us back to the failed past, that didn’t work.” Ellison says opposition to Trump’s policies will be the focus of a so- called Resistance Summer announced by the Democratic National Committee.