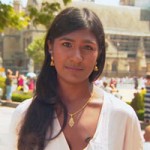 Donald Trump said Friday that immigrants fleeing violence and seeking asylum in Europe are changing “the fabric of Europe… And I don’t mean that in a positive way.” Trump’s xenophobic comments came during a shocking interview with Murdoch-owned British tabloid The Sun.

Meet the Activist Who Called Piers Morgan an “Idiot” for Criticizing Anti-Trump Protests in Britain
President Donald Trump said Friday that immigrants fleeing violence and seeking asylum in Europe are changing “the fabric of Europe… And I don’t mean that in a positive way.” Trump’s xenophobic comments came during a shocking interview with the Rupert Murdoch-owned British tabloid The Sun. Massive protests have greeted President Trump during his two-day trip to Britain—including a 20-foot-long giant baby Trump blimp outside Parliament. Ash Sarkar is the anti-Trump coalition organizer who confronted Piers Morgan during a “Good Morning Britain” interview Thursday that went viral.

In U.K., Trump Insults Theresa May, Praises Far-Right Boris Johnson, Attacks London’s Muslim Mayor
President Trump is meeting with Prime Minister Theresa May today, just hours after warning that a “soft Brexit” will kill Britain’s chances of a future trade deal with the United States. In an explosive interview with the Rupert Murdoch-owned British tabloid The Sun in which Trump claimed that Britain is losing its culture due to immigration, Trump said Theresa May had ignored his advice on Brexit negotiations.

Judge Rules Trump Admin May Have Violated Free Speech Rights of Mexican Journalist Detained in U.S.
There’s been a major development in the case of a jailed Mexican journalist that Democracy Now! has followed closely. In El Paso on Wednesday, a federal judge issued a 26-page ruling that questioned the Trump administration’s detention of Emilio Gutiérrez Soto and his son Oscar, and ordered an August 1 hearing to examine whether immigration officials violated his First Amendment rights. Gutiérrez first sought asylum in the United States in 2008 after receiving death threats for reporting on alleged corruption in the Mexican military. He’s lived here in the U.S. for the past decade and has since won the National Press Club’s Freedom of the Press Award.

Will Parents Separated from Their Children at the Border Be Forced to Separate Again to Win Asylum?
Two days after a court-imposed deadline, the Trump administration said Thursday that just 57 of more than 100 children under the age of 5 have been reunited with their parents after they were separated at the border under the “zero tolerance” policy. This comes as the Trump administration has announced a new asylum policy at the U.S.-Mexico border, which instructs immigration officers to immediately reject asylum seekers who say they are fleeing gangs or domestic violence. Renée Feltz, Democracy Now! correspondent and producer, has long reported on the criminalization of immigrants, family detention, and the business of detention. Her new story for The Nation, reported in partnership with The Investigative Fund at The Nation Institute, is headlined “For Some Migrant Families, a Second Separation Awaits.”