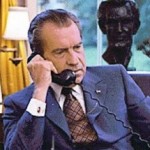 CNN and The New York Times report White House Chief of Staff Reince Priebus sought unsuccessfully to have the FBI refute news reports that Donald Trump’s campaign advisers were in frequent contact with Russian intelligence agents ahead of November’s election.

As Calls Grow to Impeach Trump, Former Nixon Counsel John Dean Sees “Echoes of Watergate”
Trump has been in office for only 36 days, and there is already a growing chorus of voices calling for his impeachment. This comes as CNN and The New York Times report White House Chief of Staff Reince Priebus sought unsuccessfully to have the FBI refute news reports that Donald Trump’s campaign advisers were in frequent contact with Russian intelligence agents ahead of November’s election. The allegations have drawn comparisons to former President Richard Nixon’s 1972 discussion with aides who used the CIA to push the FBI away from investigating the Watergate burglary that later led to his resignation. Someone who has been at the center of the unraveling of a presidency and a vote for impeachment is President Richard Nixon’s White House counsel, John Dean. He is the author of several books, including “The Nixon Defense: What He Knew and When He Knew It,” “Conservatives Without Conscience” and “Broken Government: How Republican Rule Destroyed the Legislative, Executive, and Judicial Branches.”

John Dean: The Difference Between Trump & Nixon is Trump Says Publicly What Nixon Said on Wiretap
President Richard Nixon’s former counsel, John Dean, compares Donald Trump’s attitude toward the media to that of Nixon. “The big difference is, Trump is doing this right out and challenging the First Amendment, one of our most important because it involves freedom of the press and freedom of speech,” Dean says. “Anything that he doesn’t like, any reporting, he calls being an enemy of the people … It’s just ludicrous. And it’s troublesome that he would try to sway the press by using the bully pulpit of his office to intimidate them.”

NFL Star Michael Bennett on Refusing to Go to Israel, Black Lives Matter & His Love for Angela Davis
In a Democracy Now! exclusive, Amy Goodman speaks with Seattle Seahawks defensive end Michael Bennett, who made headlines when he pulled out of an Israeli government-sponsored trip to Israel for NFL players. They are joined by Dave Zirin, sports editor for The Nation magazine. The two discuss the role of sports in politics, including Olympian John Carlos, as well as Colin Kaepernick’s support for the Black Lives Matter movement that inspired players throughout the country at all levels to take similar actions.