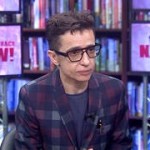 The Justice Department recently indicted 13 Russians and three companies in connection with efforts to influence the 2016 presidential election. The indicted are accused of orchestrating an online propaganda effort to undermine the U.S. election system.

Masha Gessen: Did a Russian Troll Farm’s Inflammatory Posts Really Sway the 2016 Election for Trump?
The Justice Department recently indicted 13 Russians and three companies in connection with efforts to influence the 2016 presidential election. The indicted are accused of orchestrating an online propaganda effort to undermine the U.S. election system. The indictment claims the Russians spread negative information online about Hillary Clinton and supportive information about Donald Trump, as well as Bernie Sanders—but some are warning against overstating what Russia accomplished. Award-winning Russian-American journalist Masha Gessen is a longtime critic of Russian President Vladimir Putin. Her recent piece for The New Yorker is titled “The Fundamental Uncertainty of Mueller’s Russia Indictments.”

Masha Gessen: Russiagate Has Become a Conspiracy Trap Obscuring How Trump Is Damaging Nation
Russian-American journalist Masha Gessen talks about how President Trump has benefited from what she calls the “conspiracy trap” around Russia’s role in the 2016 election. She wrote last year, “Russiagate is helping him—both by distracting from real, documentable, and documented issues, and by promoting a xenophobic conspiracy theory in the cause of removing a xenophobic conspiracy theorist from office.”

“The Young Karl Marx”: Raoul Peck on New Film Examining How Marx Developed Critique of Capitalism
World-famous filmmaker Raoul Peck is releasing a film today in Los Angeles and New York on the life and times of Karl Marx. It’s called “The Young Karl Marx.” The film’s release comes as the head of the National Rifle Association, Wayne LaPierre, broke his silence after last week’s Florida school shooting that left 17 dead, attacking gun control advocates as communists in an address to the Conservative Political Action Conference, or CPAC. Peck speaks about his new film and the role of Marxism in organizing for gun reform.