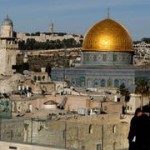 At the United Nations, over 120 countries defied President Trump Thursday by voting in favor of a resolution calling for the United States to drop its recent recognition of Jerusalem as Israel’s capital. The final vote was 128 to 9, while 35 nations abstained and 21 countries cast no vote.

Rashid Khalidi: U.S. Recognition of Jerusalem as Israel’s Capital Means It Cannot Be a Peace Broker
At the United Nations, over 120 countries defied President Trump Thursday by voting in favor of a resolution calling for the United States to drop its recent recognition of Jerusalem as Israel’s capital. The final vote was 128 to 9, while 35 nations abstained and 21 countries cast no vote. Control of Jerusalem is one of the most contested issues: Palestinians see East Jerusalem as the capital of their future state. Sustained protests continue in the Israel-occupied Palestinian territories, despite a brutal Israeli military crackdown. Rashid Khalidi is the Edward Said professor of Arab studies at Columbia University and author of “Brokers of Deceit: How the U.S. Has Undermined Peace in the Middle East.”

Stoked! Journalist Alexei Wood & First J20 Defendants Found “Not Guilty” as 188 Still Face Trial
In a blow to the Trump administration’s efforts to silence dissent, the first trial of people arrested at Inauguration Day “Disrupt J20” protests ended Thursday with all of the defendants found not guilty of all charges. Six people faced multiple felonies and 50 years in prison for just being in the area where anti-fascist and anti-capitalist protesters were marching. During the protest, police blockaded more than 200 people into a corner in a process known as “kettling” and carried out mass arrests of everyone nearby, including medics, legal observers and some journalists. This first case was closely watched as a bellwether for free speech, because one of the six people on trial was Alexei Wood, an independent photojournalist from San Antonio, Texas, whose work focuses on resistance movements. He came to document protests during the inauguration on January 20 and live-streamed the street detentions by police and even his own arrest.

Catalan Separatists Win Slim Electoral Majority Despite Jailing & Exile of Pro-Independence Leaders
In a major setback for Spain, Catalan separatist parties have won a slim majority in the Catalan Parliament. Voters went to the polls Thursday in a snap election called for by Spanish Prime Minister Mariano Rajoy, who had sacked the previous separatist government. Thursday’s vote comes after Catalonia’s regional Parliament voted in October for independence by a margin of 70 votes to 10. The Spanish Senate in Madrid swiftly responded by granting Spanish Prime Minister Mariano Rajoy unprecedented powers to impose direct rule on Catalonia under Article 155 of the Constitution, which had never been used before in modern Spain’s democratic history. The move stripped the northeastern region of its autonomy in efforts to crush Catalonia’s growing independence movement. Rajoy then called for new elections, counting on Catalan voters to support pro-unity parties.