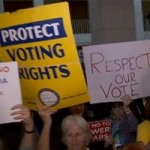 Republican lawmakers in North Carolina are being accused of waging a legislative coup by attempting to strip power from the state’s incoming governor, Democrat Roy Cooper. Cooper narrowly beat Republican Governor Pat McCrory by 10,000 votes last month. In an unprecedented move, Republicans filed dozens of new bills this week during a special session of the General Assembly called to consider relief for Hurricane Matthew victims.

The Republican lawmakers are attempting to impose measures to slash the number of state employees appointed by the governor, require Senate approval for all of the governor’s Cabinet picks and strip the governor of the power to appoint University of North Carolina trustees. Another bill aims to weaken the governor’s control over the state Board of Election. Yet another Republican bill would strip some power away from the Democratic governor and give it to the lieutenant governor, who happens to be a Republican. None of the bills were being considered until after Republican Governor Pat McCrory conceded defeat.

In Charleston, South Carolina, a jury has found Dylann Roof guilty on 33 counts of federal hate crimes for murdering nine black worshipers, including Pastor Clementa Pinckney, at the historic Emanuel AME Church in June 2015. The verdict, reached after the jury deliberated for less than two hours, came after 30 witnesses testified over six days. Roof embraced white supremacist views and was shown in photographs posing with the Confederate flag and a pistol.