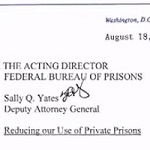 In what some are calling a historic change in policy, the Justice Department says it will phase out the use of privately run federal prisons. In a memo describing the policy shift, Deputy Attorney General Sally Yates said research showed private prisons “simply do not provide the same level of correctional services, programs, and resources” and “do not save substantially on costs,” either. Anyone surprised? Anyone? 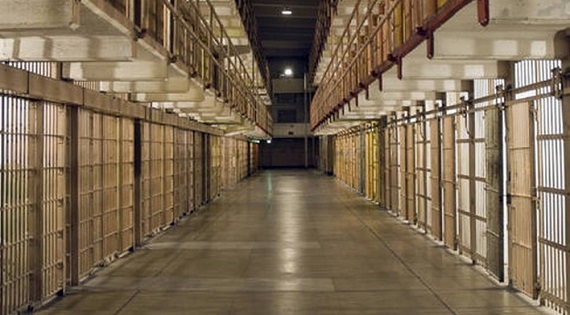 How did private federal prisons not function as well as state ones? It’s a mystery! Or maybe not. Photo from Democracy Now! website, and here’s the DOJ memo.

In what some are calling a historic change in policy, the Justice Department says it will phase out the use of privately run federal prisons. In a memo describing the policy shift, Deputy Attorney General Sally Yates said research showed private prisons “simply do not provide the same level of correctional services, programs, and resources” and “do not save substantially on costs,” either. Yates added that government education and training programs for prisoners “proved difficult to replicate and outsource” in the private sector. In the memo, she said as the contracts for 13 private federal facilities come to the end of their terms over the next five years.

Some 22,000 federal prisoners out of a total of 193,000 will eventually be impacted by the move. Most are immigrants convicted of crossing the border without permission—charges that currently account for 50 percent of all federal prosecutions. This follows a series of reports by investigative journalists. In today’s first segment, Amy and Juan spoke with reporter Seth Freed Wessler, whose yearlong probe for The Nation and Reveal News uncovered dozens of questionable deaths and years of dire warnings from internal monitors at the private prisons now set to lose their contracts.

The news sent stocks plummeting on Thursday for for the companies that operate the prisons: Corrections Corporation of America, The GEO Group and Management and Training Corporation. The show investigates the companies’ track record with Shane Bauer, whose 18-month investigation of a CCA prison for Mother Jones recently took up its entire issue. Titled “My Four Months as a Private Prison Guard,” it chronicles his time as an undercover correctional officer at Louisiana’s Winn Correctional Center. His most recent article is titled “This Prisoner Hanged Himself at the Private Prison Where I Worked. His Family Says He Didn’t Have to Die.” We are also joined by reporter Seth Freed Wessler, who investigated several CCA prisons for the federal government that are now set to close.

The DOJ’s announcement will have no direct impact on private immigrant detention facilities, which are operated by the same companies under contracts with the Department of Homeland Security. Detention Watch Network has now called for DHS “to follow suit and break their ties with private prison companies that operate more than half of … U.S. immigrant detention facilities as a step towards ending detention completely.” Democracy Now! correspondent Renée Feltz notes the detention centers hold people who have committed civil offenses, and children as young as two years old.

Also today, there is a discussion on the State Department’s statement that a plane filled with $400 million in cash for Iran was “leverage” to ensure that five American prisoners held by Iran were released. Republicans, including Donald Trump, have said the money sent in January was a ransom for the prisoners. The Obama administration says it was a pre-planned transfer that was part of the landmark nuclear deal and that the negotiations regarding the two issues were separate. Guest Shane Bauer spent 26 months in Tehran’s Evin Prison, four of them in solitary, after he and two other Americans, Sarah Shourd and Joshua Fattal, were captured while hiking near the unmarked Iran-Iraq border and then freed after negotiations.

Finally, ahead of the final weekend of the Olympics in Rio de Janeiro, Brazilian police have accused a group of U.S. Olympic swimmers of vandalism during an incident at a gas station last weekend and say they are now considering whether to recommend charges against them, including gold medalists Ryan Lochte and Jimmy Feigen. The swimmers said they were robbed by gunmen impersonating police officers in the early hours of Sunday as they returned in a taxi to the Athletes Village from a party in the city. However, after an investigation, Rio police said there had been no robbery. U.S. Olympic authorities later apologized to Brazil after two U.S. swimmers who were kept in the country for questioning were allowed to go home.

Eric has completed the 2016 Midyear Reading, BALANCE. Get all 12 signs for the bargain price of just $57 while you still can. Image from the 2012 Blue Marble by NASA Goddard Space Flight Center.