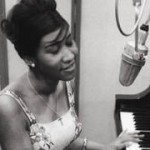 In 1970, Aretha Franklin offered to post bail for Angela Davis, who was jailed on trumped-up charges. Aretha Franklin told Jet magazine in 1970, “My daddy says I don’t know what I’m doing. Well, I respect him, of course, but I’m going to stick by my beliefs. Angela Davis must go free. Black people will be free.”

Respect: A Tribute to Aretha Franklin, an Icon of the Civil Rights & Feminist Movements
Aretha Franklin, the Queen of Soul, died Thursday at her home in Detroit at the age of 76. For decades, Aretha Franklin has been celebrated as one of the greatest American singers of any genre, who helped give birth to soul and redefined the American musical tradition. In 1987, Aretha Franklin became the first woman to be inducted into the Rock and Roll Hall of Fame. She held the record for the most songs on the Billboard Top 100 for 40 years. Rolling Stone ranked her the greatest singer of all time on its top 100 list, calling her “a gift from God.” Her hit single “Respect” became part of the soundtrack to the civil rights movement, which she also supported behind the scenes.

Angela Davis: Aretha Franklin Offered to Post Bail For Me, Saying “Black People Will Be Free”
In 1970, Aretha Franklin offered to post bail for Angela Davis, who was jailed on trumped-up charges. Aretha Franklin told Jet magazine in 1970, “My daddy says I don’t know what I’m doing. Well, I respect him, of course, but I’m going to stick by my beliefs. Angela Davis must go free. Black people will be free. I’ve been locked up (for disturbing the peace in Detroit) and I know you got to disturb the peace when you can’t get no peace. Jail is hell to be in. I’m going to see her free if there is any justice in our courts, not because I believe in communism, but because she’s a Black woman and she wants freedom for Black people. I have the money; I got it from Black people—they’ve made me financially able to have it—and I want to use it in ways that will help our people.” Activist and scholar Angela Davis discusses what Aretha Franklin meant to her.

Angela Davis: Aretha Franklin “Will Forever Animate Our Collective Sense of Desire for Change”
Aretha Franklin became the voice of the civil rights movement in 1967, when her cover of Otis Redding’s “Respect” became an international sensation. Franklin was a steadfast supporter of the civil rights movement throughout her long and remarkable career. She sang at Dr. Martin Luther King Jr.’s funeral after his assassination in 1968. The Rev. Jesse Jackson said Franklin anonymously helped fund the movement for decades. He said, “When Dr. King was alive, several times she helped us make payroll. … Aretha has always been a very socially conscious artist, an inspiration, not just an entertainer.” Angela Davis is an author, professor and activist at the University of California, Santa Cruz. Other guests are Farah Jasmine Griffin, professor of English and comparative literature and African-American studies at Columbia University, and Mark Anthony Neal, James B. Duke professor of African & African American studies at Duke University.