“We will prevail.” Those are the three words spoken by three different Presidents about the seemingly everlasting battle in Iraq: Bush Sr. and Jr., and now Obama. 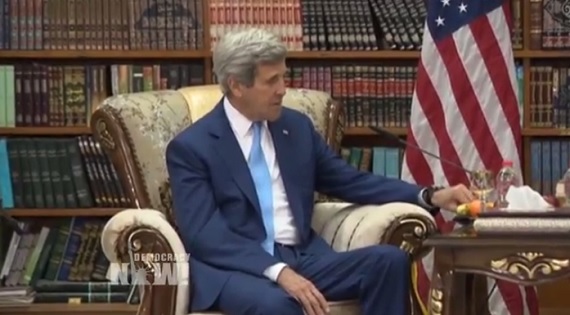 “We will prevail.” Those are the three words spoken by three different Presidents about the seemingly everlasting battle in Iraq: Bush Sr. and Jr., and now Obama. Amy Goodman and Juan Gonzalez interviewed retired Army Colonel Andrew Bacevich.

Bacevich’s book, America’s War for the Greater Middle East: A Military History, states that this continuous theme is part of a failed war in the Middle East, ongoing since the 1980s. Bacevich’s son was killed serving in Iraq in 2007. Here is some of what he had to say:

Prior to 9/11, I don’t believe that presidents and policymakers actually had a clear understanding of what they wanted to do in the Greater Middle East. They somehow assumed that the presence of U.S. forces or introduction of U.S. forces would have some kind of a positive effect. It’s after 9/11 that Rumsfeld, and those around him—the president, Cheney, Wolfowitz—embarked upon this massively ambitious strategy.

Bacevich also explained why he agrees with Bernie Sanders about Hillary Clinton’s support for war.