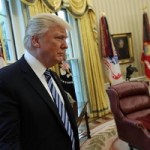 Just hours before a deadline, Congress has averted a government shutdown by working on a short-term spending bill and a broader deal to fund agencies through September. If the extension is not approved today, federal agencies will run out of money by midnight tonight.

“It Has Not Gone Well”: 100 Days of President Trump and No Major Achievements
Just hours before a deadline, Congress has averted a government shutdown by working on a short-term spending bill and a broader deal to fund agencies through September. If the extension is not approved today, federal agencies will run out of money by midnight tonight. One of the key disputes stemmed from Trump’s demands that the government funding bill allocate $1.4 billion for border wall construction. “We don’t have a budget. We have a continuing resolution where basically we’re operating under last year’s numbers,” says Vermont Congressman Peter Welch, Chief Deputy Whip of the House Democratic Caucus. “The fundamental responsibility of the legislative body is to pass a budget. We have not done that during the entire time that Paul Ryan has been the speaker of the house. It has not gone well.” This comes as House Republicans have called off their efforts to revive a bill to repeal and replace the Affordable Care Act, preventing Trump from winning his first major legislative victory ahead of Saturday, which marks his 100th day in office.

Democratic Rep. Peter Welch Condemns Trump’s “Reckless” Threats Toward North Korea
The Trump administration sent mixed signals on North Korea Thursday, as Secretary of State Rex Tillerson said the U.S. is open to direct negotiations with Kim Jong Un’s regime over his country’s nuclear program, while President Trump hinted at a possible nuclear war. Trump made the remark in an interview with the Reuters news service. Trump’s comment came as Secretary of State Tillerson told NPR he’s open to direct talks with North Korea if the country is serious about permanently abandoning its nuclear program. Meanwhile, President Trump told Reuters that South Korea should pay the $1 billion price tag for a THAAD missile defense system the U.S. recently began installing. Trump suggested the U.S. could cancel a free trade deal between the two countries if South Korea doesn’t accept the demand. “I think the president should be talking diplomacy,” says guest Peter Welch, U.S. Congressman from Vermont. He is Chief Deputy Whip of the House Democratic Caucus, “not making a reckless threat of military action where it is going to be very damaging.”

Trump’s Tax Plan & Push To End Net Neutrality Are An “All Out Assault” on Rural America
As Trump marks his first 100 day in office, Rep. Peter Welch (D-VT) argues many of his plans have increased inequality. “The tax plan is one where the benefits go to the elites in urban areas and corporations,” Welch says. “Those are direct policies that will be crushing to the economic prospects of folks, especially in rural America.” Meanwhile, a plan that backed by the Koch brothers to classify the Internet as a public utility would leave the industry to largely police itself.

House Oversight Dems Demand White House “Paper Trail” on National Security Adviser Michael Flynn
Congressman Peter Welch explains why he joined his Democratic colleagues on the House Oversight Committee in demanding White House documents on President Trump’s former national security adviser Michael Flynn. In a letter to chairman Jason Chaffetz, the group wrote, “There is obviously a paper trail that the White House does not want our Committee to follow. If the White House refuses to produce the documents requested by the Oversight Committee—as it has to date—we believe the Committee should consider employing compulsory measures as it did in similar cases during the previous Administration.”

Vermont Lawmaker: Residents of Sanctuary Cities Reject Trump’s “Dragnet Approach” on Immigration
Burlington, Vermont, is a sanctuary city. Vermont Rep. Peter Welch says there has been enormous citizen support toward undocumented workers. “You’re just seeing people across this country say, ‘Wait a minute, that is not the America I know,'” Welch notes. He also discusses the need for local control over whether police departments enforce immigration laws and says, “It is appropriate for law enforcement to have discretion.”

350.org’s Bill McKibben on People’s Climate March: “Weekends Are for Fighting Tyranny”
To mark the 100th day of Donald Trump’s presidency, thousands of climate activists from around the country are converging in Washington, D.C. on Saturday for the People’s Climate March. Already, Trump has threatened to pull the U.S. out of the Paris climate accord, begun dismantling President Obama’s climate legacy and revived the Keystone XL and Dakota Access pipelines. He has also put climate change deniers in charge of several key agencies, including the Environmental Protection Agency, and proposed slashing the budget of the EPA and other climate programs. This comes as scientists have confirmed 2016 was the warmest year on record.