Today’s show features last night’s Democratic debate in Brooklyn, NY, ahead of the primary on April 19. 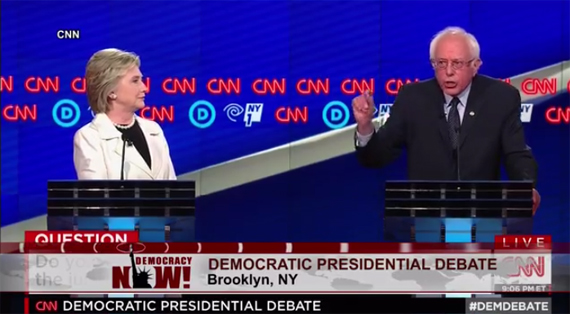 Today’s show features last night’s Democratic debate in Brooklyn, NY, ahead of the primary on April 19. Bernie Sanders has won eight of the last nine contests, but Hillary Clinton leads the polls. They discussed Wall Street, Social Security, Israel and other issues.

Juan González then spoke about Clinton’s claim that Sanders struggled during his New York Daily News interview, saying she “grossly distorted” the facts:

But the—what I came across—what I came back with from that was significantly different from what’s been not only reported, but what Senator Clinton said last night, because she really grossly distorted what actually happened in those meetings. I think that, as I wrote in today’s Daily News, I came away with a far different impression, that, yes, that I believe that Senator Sanders did stumble somewhat in trying to explain the process by which the banks would be closed, who are—that are “too big to fail,” but I don’t think—I think, overall, he handled all of the questions that were thrown at him pretty well, and I came away impressed.

Also, Sanders repeated his statement that the Israel’s actions in Palestine had been “disproportionate,” adding that the Palestinian people should be treated with “respect and dignity.” The show then reports on a 1000-strong protest in Manhattan against the Drumpf, at which more than 20 people were arrested, including Democracy Now! videographers Charina Nadura and Juan Carlos Dávila, who had been filming the demonstration.