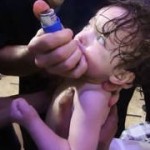 As the United Nations Security Council holds an emergency session over the growing prospect of a war between Russia and the U.S., after President Trump threatened U.S. strikes in response to an alleged chemical weapons attack in Douma, Syrian-Canadian writer Yazan al-Saadi responds.

Syrian Researcher: Focus on Alleged Chemical Attack Ignores War’s Ongoing Deaths by Airstrikes, Bullets
As the United Nations Security Council holds an emergency session over the growing prospect of a war between Russia and the U.S., after President Trump threatened U.S. strikes in response to an alleged chemical weapons attack in Douma, Syrian-Canadian writer Yazan al-Saadi responds. “Let’s remind everyone that the U.S. is striking Syria already. You have more than 2,000 soldiers on the ground. There are bases.” He adds, “For me, as a Syrian, I see it as an occupation, just like how I see the Russians are an occupation on the country.” Regarding the alleged chemical attack in Syria, he says, “This ignores the fact that most deaths are happening through conventional means,” such as airstrikes.

As Trump Reconsiders TPP Stance, Fair Trade Advocates Say Real Fight Is over NAFTA Renegotiation
President Trump campaigned against the Trans-Pacific Partnership, calling it a “disaster,” a “horrible deal” and a “rape of our country.” He withdrew from the controversial deal during his first week in office. But on Thursday, he told a group of state lawmakers he wants the U.S. to rejoin the pact. Meanwhile, 11 nations that represent about a seventh of the world’s economy signed the TPP earlier this year.

Nearly 4 People Are Evicted Every Minute: New Project Tracks U.S. Eviction Epidemic & Effects
A new project called the Eviction Lab examined more than 80 million eviction records going back to 2000 and found that in 2016 alone there were nearly four evictions filed every minute. More than 6,300 Americans are evicted every day. Studies show that eviction can lead to a host of other problems, including poor health, depression, job loss and shattered childhoods. Having an eviction on one’s record also makes it far more difficult to find decent housing in the future. Now the Eviction Lab’s database is being shared with the public in an interactive website that allows people to better track and understand evictions in their own communities.