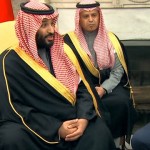 Trump Admin’s Secretive Talks to Sell Saudi Arabia Nuclear Technology Spark New Fear of Arms Race
House Democrats are accusing the Trump administration of moving toward transferring highly sensitive nuclear technology to Saudi Arabia in potential violation of U.S. law. Critics say the deal could endanger national security while enriching close allies of President Trump. Saudi Arabia is considering building as many as 16 nuclear power plants by 2030, but many critics fear the kingdom could use the technology to develop nuclear weapons and trigger a nuclear arms race in the Middle East. Democratic Congressmember Ro Khanna of California and Isaac Arnsdorf, a reporter with ProPublica, are interviewed. Arnsdorf first wrote about the intense and secretive lobbying effort to give nuclear technology to Saudi Arabia in 2017. His reporting was cited in the House report.

Saudi Scholar: My Father Faces the Death Penalty in Saudi Arabia for Supporting Human Rights
While the murder of Saudi journalist Jamal Khashoggi inside the Saudi Consulate in Istanbul in October sparked international outrage, far less attention has been paid to the ongoing Saudi repression at home. We speak with Abdullah Alaoudh, whose father has been locked up in solitary confinement in Saudi Arabia for his political activism since September 2017. Prior to his arrest, prominent Islamic scholar Salman Alodah had been a vocal critic of the Saudi monarchy who had called for elections with 14 million Twitter followers. But for the past 17 months, Salman Alodah has been silenced. He was one of dozens of religious figures, writers, journalists, academics and civic activists arrested as part of a crackdown on dissent in 2017 overseen by Saudi Crown Prince Mohammed bin Salman. Alodah’s son Abdullah Alaoudh is interviewed. He is a senior fellow at Georgetown University in the Center for Muslim-Christian Understanding.

Saudis Facing Criminal Charges in the U.S. Keep Disappearing. Is the Kingdom Helping Them Escape?
A growing number of Saudi students are vanishing while facing serious criminal charges in the U.S. Federal law enforcement officials are now launching an investigation into the suspicious disappearances to probe if the Saudi government was involved and how. Shane Dixon Kavanaugh is interviewed who is The Oregonian reporter who broke the story about the spate of Saudi student disappearances. He found that in at least four cases the Saudi government paid a defendant’s bail and legal fees before he disappeared. In one case, police believe Saudi officials snuck a Saudi national out of the country on a private plane using a fake passport so he could avoid being tried for killing a 15-year-old Portland teenager in a hit-and-run.